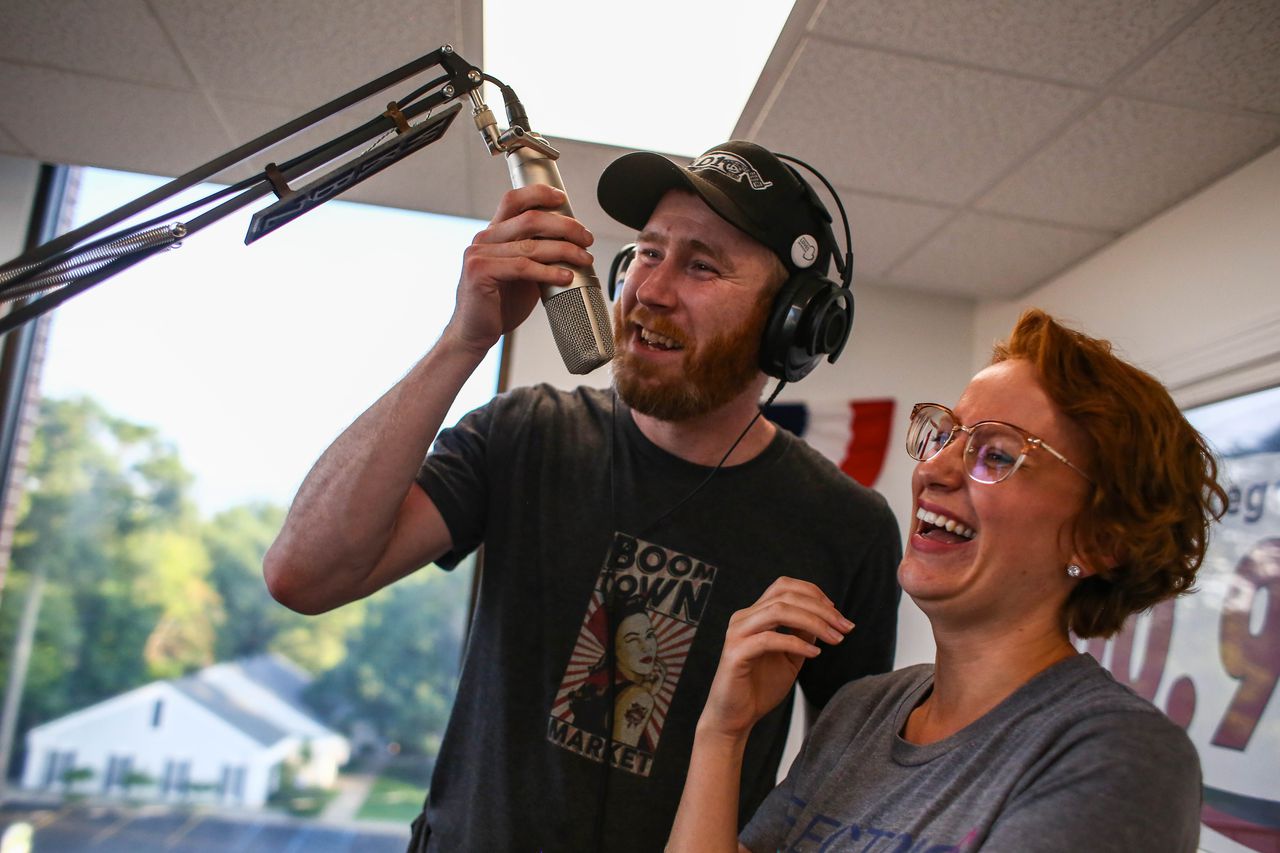 MUSKEGON, MI – For Mitch Anderson, the founder of Muskegon’s Black Circle Radio, sharing music that moves him is a lot like therapy.

Since 2009, Anderson has used his beloved all-vinyl radio show to overcome his on-air anxieties – feelings represented by an eclectic mix of songs handpicked by Anderson and his rotating cast of guest DJs.

This year the program celebrated its 10th anniversary, a feat that did not escape Anderson.

The show is unpredictable, with a multi-genre mix of older songs and newer fare. In one sitting, Anderson could spin classic rock, folk, jazz and novelty tracks, all within the first hour. Its spontaneity and reach is the reason Black Circle Radio has a dedicated following in Muskegon County and online at BlackCircleRadio.com.

Others connect because of their affinity for Anderson – an affable mass of manic energy and infectious charisma.

But through Black Circle Radio, Anderson said he’s channeled that energy into a program that thinks and feels the way it does.

â€œMental health is really a big part of it, and programming is part of my personal therapy,â€ Anderson told the MLive / Muskegon Chronicle. â€œI am able to express the things that are going on in my head safely while of course following the rules and regulations of the FCC.

“I hope people can tell where I am by what they hear.”

After a decade on the air, Anderson, 31, can now reflect on how his all-vinyl radio show is keeping him healthy and grounded.

A motley team of music geeks

Every Monday evening, Anderson arrives at the 100.9 FM studio with several pizzas and a six pack of craft beers.

Stacks of records, some old and some new, lean neatly against the wall. For the next two hours, these albums will serve as a musical backdrop for the thoughts of Anderson and his rotating group of guest guests.

Sometimes that includes Anderson’s wife and confidante, Debra Warren, an outgoing Muskegon town commissioner who did not seek re-election in November.

The air is electric in the last minutes before the airtime, thenâ€¦ silence.

â€œWe all have bodies,â€ Anderson says quietly. â€œWe all have a soul. We all live together in one place. This place we call the world.

This is how Black Circle Radio begins several of its episodes, with an Anderson incantation and musical selections from friends played on a physical medium.

The show runs from 7:30 p.m. to 9:30 p.m. Black Circle Radio has a new show every week, outside of statutory holidays and vacations, Anderson said.

The fascination with vinyl is only part of what makes the show special, Warren said.

â€œMitch has real honesty on the air,â€ said Warren. “For me, both as an actor and as a listener and consumer of media, it’s really refreshing to feel an honest presence and perspective on the airwaves.”

The program began broadcasting on 100.9 FM in 2014, shortly after the station went live.

Prior to 2014, Black Circle Radio occupied a time slot on Central Michigan University’s student radio station and online from any location with a strong internet connection.

Anderson told MLive it has been a blessing to do what he does on 100.9 FM in a community that still embraces terrestrial radio.

He also received a fair amount of help from local and national sponsors.

In October, Anderson was a media sponsor of the famous Making Vinyl conference in Los Angeles, a paradise for physical music producers. True to form, Anderson did a live broadcast from the conference room.

Retro authenticity in the modern era

With 10 years to its credit, Black Circle Radio is an improbable DIY success story in the age of the podcast and pre-ordered playlist.

The same could have been said in 2009, when Anderson created Black Circle Radio during his time at CMU.

As his fellow broadcasting students gazed into the digital future of radio, Anderson looked back, so to speak.

â€œWhen I got involved with the radio station (run by students), I was bored to tears,â€ he said. â€œI was sitting in a chair in front of a computer and I couldn’t really choose the music. It was really hands off, but I knew I loved the idea of â€‹â€‹broadcasting.

At the time, Anderson said he didn’t own a single vinyl record. A chance encounter with an all-vinyl DJ who was selling his gear inspired Anderson to purchase his own turntables in the hopes of playing an all-vinyl radio show.

When he presented his concept on student radio, his peers laughed at him.

â€œThey almost voted not to let me on the college radio station because they said it didn’t fit the format,â€ Anderson said. â€œSo they ended up putting me in a very small station at the time, but then we moved on to the bigger station with a massive tower. “

Black Circle Radio’s first broadcasts were broadcast from Mount Pleasant, reaching Lansing in the south and Bay City in the east.

â€œIt was a pretty cool feeling to stream music this far from a physical medium,â€ he said.

Spirit of Resistance Radio, started by several of Anderson’s professors, became the new home of Black Circle Radio when Anderson graduated in 2012. The program continues to appear on the station in 2019. For SOR broadcasts, Anderson plays live from his home studio or offers previously recorded programming to the station.

Mental health on the radio

It’s 8:30 p.m. on a balmy August night and Anderson is immersed in a Black Circle Radio show with Warren and his friends Jonathan Todd, Jr. and Rory Closz.

Anyone playing records that night has to follow a rule: they can only talk about how the music makes them feel.

â€œI don’t like talking about artists because I don’t share their experience,â€ he said. â€œI don’t think this is my place. That’s why I play the song. That’s why it’s not a podcast. I believe the artist should be the one telling their story.

â€œThe program has become more of a reflection of my state of mind that day.

Self-reflection has been vital for Anderson to keep the show and his life together.

Anderson has spoken openly about his mental health issues. He was diagnosed with manic depression, bipolar disorder and ADHD. Anderson attends counseling regularly, but focusing on the show has allowed him to share his feelings in a safe space of his own design.

â€œI hope that when people interact with my program, they feel something, whether it’s melancholy or joy,â€ Anderson said. â€œI felt all of these things on the air, and sometimes I wish I wasn’t there.

â€œBut in times like these, it feels like therapy. You don’t want to go, but after the session is over I feel a lot better.

“Endless Bummer”, a recent song by pop-punk heroes Weezer, trailed off to its final notes. The light comes on and it picks up the waves.

” That’s life, is not it ? Anderson said, smiling from ear to ear.

Limbaugh returns to the radio program