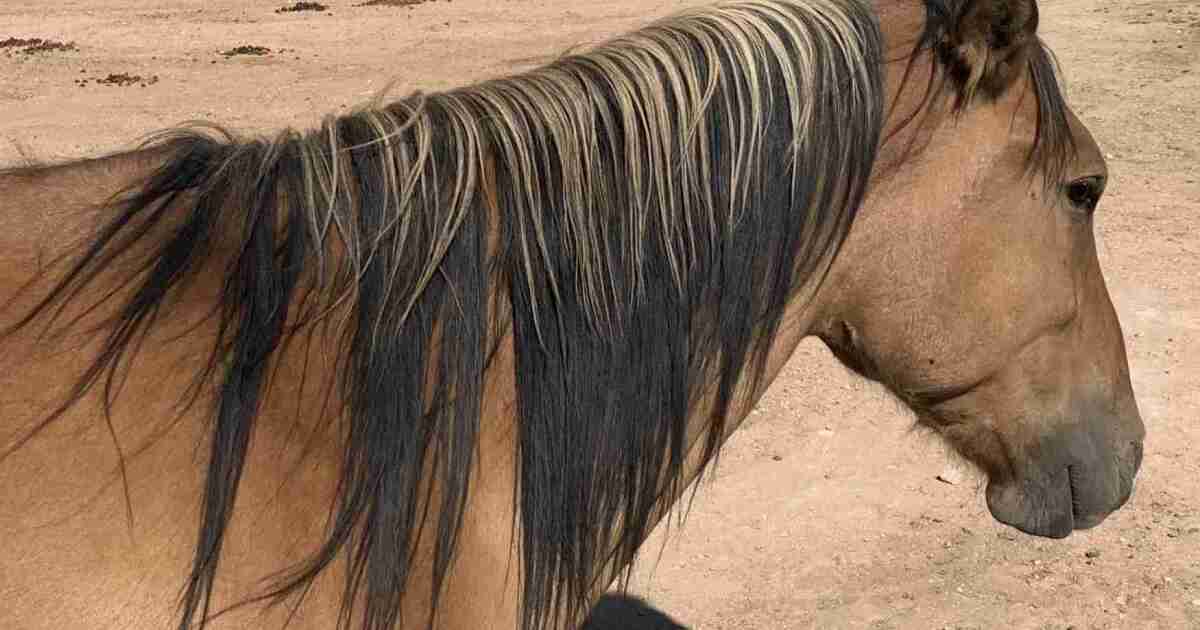 Among the wild horses of Utah roam a special breed whose history dates back to the Spanish colonialists.

They remained isolated in a mountain range near the Nevada border for hundreds of years, which kept their lineage intact.

While the Bureau of Land Management rounds up the herd to protect rangeland health, some say this breed shouldn’t be treated like your average mustang.

There are nearly 100,000 feral horses and donkeys in the West, according to the Bureau of Land Management.

But the formally wild horse who now cares for Naomi Wilson is special.

“One of the first things you’ll notice are the black-tipped ears and that they’re a bit curved,” Wilson said.

This horse comes from the Sulfur herd. She and her husband now have three of this group. They have become a bit of an expert on the breed.

“He has the spine stripe down his back and the zebra stripes down his leg. And it is necessary for [a] dun,” Wilson said.

Their mane is two-tone, black mixed with a stylish blonde.

And they have one less vertebra than other Western horses, so their backs are shorter.

But their unique physical characteristics, what horse experts call “primitive markings,” aren’t the only thing that makes this breed so appealing to Wilson and her husband.

The still-wild Sulfur lives on about 265,000 acres in a mountain range near the border of Utah and Nevada. But, as Shultz tells it quite cinematically, they’re a long way from home.

“How they got there is an incredible story,” Schultz said.

The horses come from the Iberian Peninsula, where they roamed for tens of thousands of years until the Spanish brought them to California in the 1500s as they colonized North America.

It wasn’t long before Native Americans noticed the animal.

“Thus walks a very charismatic historical character. His name was Wakara. I call him the biggest horse thief in Utah,” Schultz said.

Chief Wakara was an important leader Native Americans of Utah.

He would later be baptized into The Church of Jesus Christ of Latter-day Saints, fall out with Mormon settlers, and lead fighters in what historians call the Walker War.

But above all, he wanted horses.

Around 1840, Wakara enlisted his half-brother, a one-legged mountain man named “Pegleg” Smith, and a band of warriors to steal horses from the Spanish.

According to historical accounts, they were wildly successful.

Wakara fled with around 3,000 horses before the Spanish sent soldiers to recover their stock.

They fought an ongoing battle with the colonizers, ending near the Utah and Nevada border. At this high desert site, horses were lost in the melee.

“That left a group of horses scattered to the four winds in that location. That was the historic beginning of the Sulfur herd,” Schultz said.

The breed has become infamous for being fiercely independent and difficult to tame.

There was even a cowboy poem written about them called “Zebra Dun”.

“So from then on the horses practically ran free. The reason they escaped notice and roundup was because they lived in a mountain range covered in pines and junipers between 6 and 9,000 feet,” Schultz said.

That was until the invention of the helicopter.

To protect rangeland health, the Bureau of Land Management trying to bring down the Sulfur herd to about 200 horses, perhaps a fifth of what their herd once was.

With the help of helicopters, the agency rounds up the horses and sends them to facilities where they can be adopted by the public.

This is how Shultz and Wilson got their horses from the Sulfur herd. Wilson calls them “high dignity”.

“They are very sensitive, very intelligent. And being very dignified means they don’t like being told what to do. Some of the traditional ways people push horses, with Sulfur horses, it doesn’t work. They must feel that they have a say. They have a choice,” Wilson said.

She says she argued for years with her first Sulfur before adopting more natural riding methods.

And it changed the whole relationship, you can tell by the way the horses trotted out to greet her.

As course managers try to reduce sulfur counts in Utah, in Europe they are trying to protect them.

Genetic testing shows that Schultz’s Sulfur is a Garrano.

Only a few hundred of this breed are left in a national park in Portugal.

“Maybe I’m a little romantic at heart. But these horses are a genetic treasure. Here they are in Utah. I mean, in Europe they are almost extinct. But I guess those guys didn’t get the memo,” Schultz said.

Ron Roubidoux has been researching the Sulfur herd for over 30 years.

He even wrote a book about their history, Trail of the Line Backed Horse: An Odyssey.

He disagrees with the way the BLM is handling them.

“These horses are a historic herd. They’re not, you know, just the common mustang that ranchers or pioneers or whoever has left or lost over the years,” Roubidoux said.

He would like to see the Sulfur Herd Management Area designated as the Wild Horse and Burro Range, designed to protect horses.

But until then he says there is a dedicated group sulfur enthusiasts help spread the word and arrange adoptions.

“I think there will be more interest over time in Sulfur horses and they will probably get more popularity with more publicity, and that’s kind of what I’ve been trying to do for 30 years now, it’s trying to get the word out about the horses,” Roubidoux said.

The issue of feral horse management is controversial in the West, and Schultz cautions that he’s not an expert on range health.

But he agrees with Roubidoux that Sulfurs should be treated differently than your average mustang.

“When I look at these horses, I see history running through their veins with every beat of their hearts,” Schultz said.

After a few hundred years of captivity by Native Americans and Europeans, they were once again free in the high deserts of Utah.

“These are not wild horses. They are wild horses by nature,” Schultz said.