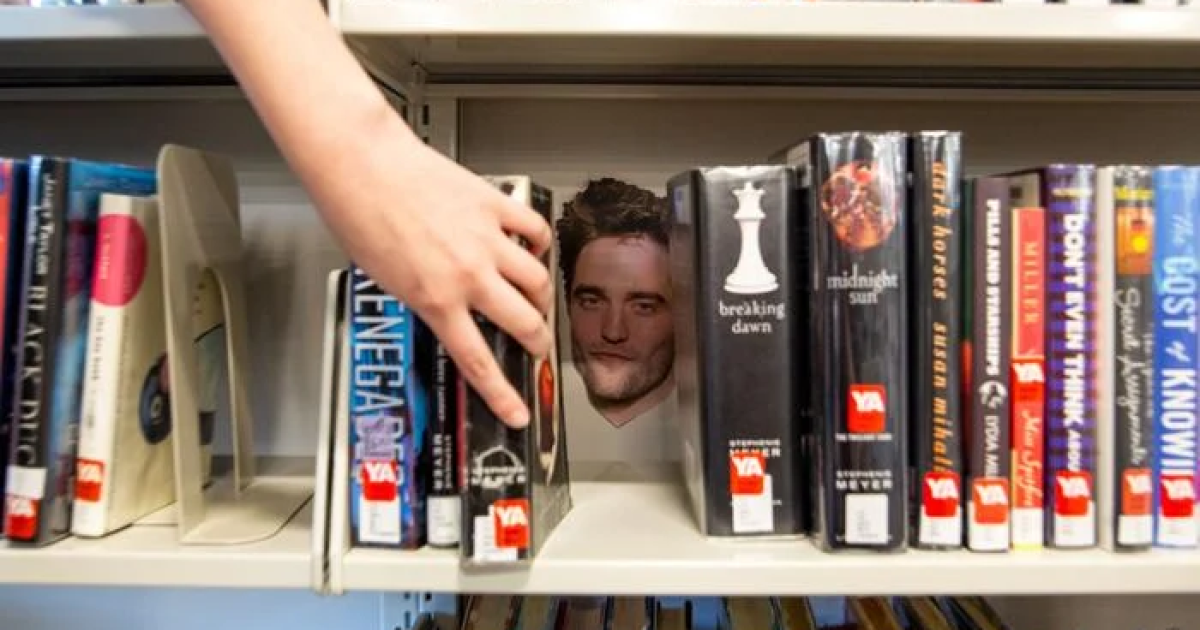 This story was originally produced by the Keene Sentinel. NHPR is republishing it in partnership with the Granite State News Collaborative.

It’s not often you see your local library in the digital spotlight. But when Chesterfield Public Library posted a video on TikTok, the popular video-sharing app, on March 28, the small rural library got its shot at internet fame, gaining more than a million views in a few hours.

The viral video shows library assistant Lucy Applegate holding a DVD copy of the animated film “Inside Out” and uses an audio clip from the cartoon “Owl House” to joke that even though the film was released seven years ago years old, some of the library’s younger patrons might consider it “old”.

Even before the pandemic, libraries across the country were using the internet to try to engage with their young audiences. Now, many libraries are using social media platforms, such as TikTok, to boost their outreach efforts.

The idea of ​​Chesterfield Public Library having a presence on the platform was not new.

“I had been thinking about creating an account for some time,” said Kathleen Packard, director of the library.

But it wasn’t until Packard attended a professional development workshop, “Leveraging Social Media for Your Brand,” earlier this year at the Hudson Public Library, that the idea came to life. Chesterfield Library was interested in exploring different ways to reach young patrons, particularly college students to young adults.

The workshop “had a strong focus on how to use TikTok as a platform for libraries to engage with younger audiences, which is what we were looking for,” Packard said. “So we were like, ‘Why not? We’ll try that; We are going to go there.'”

The library created an account on March 1 and posted its first TikTok the next day. The content started with a presentation of staff members, with images from around the building, before developing following the latest trends on the platform as a way to promote events at the library. The account, @chesterfieldlibraryhad 3,560 subscribers as of Friday.

“While we use it primarily to promote the book exhibits and programming we have at the library, we often mix in some book humor here and there,” said Applegate, 20, the assistant of the library that created the Owl House video.

“We’re going to look at what’s trending, so different songs or filters on TikTok, which can change quite frequently,” said Packard, who gives Applegate ideas before giving them complete creative freedom in the filming process and disassembly. “We ask ourselves, ‘How can I take this fun trend, in general, and make it specific to the library? How can you make it funny and relevant? »

Applegate was initially hesitant about the library creating a TikTok account.

“It was like a big leap for us at the start,” they said. “We didn’t have a big presence to begin with, so we didn’t have a base for our image that we could build on for social media.”

They first relied on what other libraries were doing on TikTok, watching other videos, and researching engagement strategies on various platforms.

However, having a library account on TikTok has its advantages.

“Libraries themselves are different entities on social media, so we can have a bit more freedom in the content we create than celebrities or influencers,” Applegate explained. “There’s a great community within TikTok among other libraries. It helps stimulate content ideas, and we just support each other.

One of the ideas they had was when the North Riverside Public Library in Illinois released a video, after they hid a photo of Robert Pattinson, one of the actors who starred in the movies based on the series of books, behind the Twilight shelf in the library collection. .

“I saw this video and just had to recreate it,” Applegate said, who then responded to the video on the platform with their own Pattinson addition in the Chesterfield Library. “It was so much fun and looked like something our customers would enjoy.”

As in any online community, there are those who interact consistently with the content in the library.

“I’ve started identifying usernames that comment often, like our videos a lot, and that can really mean two things: Either those people are local and are frequent customers, or they’re people who can be hundreds of miles away and may never make it into our library,” Applegate said. “Anyway, these are people who derive joy from the content that I create, which is really cool .”

The library has had other popular videos since then, including one promote games for college students during the April holidays which now has over 3,000 views.

“It was only meant to be a trial, we only planned to test it for three months,” Packard said of using TikTok as an engagement tool. “But thanks to this video and given the impact it had, we decided to make TikTok a permanent tool as part of our awareness campaign.”

The library has an iPad dedicated to creating content for its TikTok account and other marketing software designed for libraries, but Packard points out that it’s not a big financial burden for libraries to try this type. awareness.

“As long as you have a plan, really, there is no loss. That’s the beautiful thing about social media; you can just try things out and see what happens.

Keene Public Library has also experienced the power social media can have in exposing patrons to new material and promoting its collections. “Recently there has been an increase in cases of older books [classics] thanks to a recent trend in the BookTok community,” said Jay Fee, Keene’s Teen Services Librarian.

#BookTok, a hashtag used by creators on TikTok that features book recommendations, reviews, and memes about — you guessed it — books, helps introduce people to new recommendations.

Keene Public Library has software that connects to its catalog when promoting certain collections on social media, allowing staff to track data on the impact of these efforts. Through the use of its YouTube account, as well as its Facebook page, Keene Library can constantly promote national events and initiatives at the library, such as the National Teen Lock-in which takes place each summer.

“We were able to promote collections available online, while connecting with our teenage audience,” Fee said. “We were also able to share another part of ourselves, engaging with our young clients in a fun and engaging way.”

Social media has also proven essential for many local libraries during the pandemic.

“It was a lifeline for us to stay in touch with our customers,” said Julie Rios, director of technology at Walpole Town Library. “We held online story hours for our younger guests, and to engage our teenage guests we started an online book club where they read two to three chapters online and kids could interact with staff. through comments.

Like the Chesterfield Library, the Walpole Library has also discovered how far its contents can go.

Recently, Rios received an email from a nine-year-old girl, Ruby, requesting a specific book for online story time. Ruby was in Washington, over 2,948 miles away.

“Who knew the little old Walpole Public Library could reach kids all over Washington State?” said Rios. “The reach of social media is truly exceptional.”

The library has also been doing Facebook Lives – videos filmed and streamed live on its Facebook page – of reviews of books in its collection for just over a year now, starting in March 2021. The videos are then saved to the the library’s Facebook page as well as its YouTube account so people can see it later.

“We’ve definitely seen an increase in the number of snippets that have been reviewed on these ‘lives’ — in fact, those are the fastest-removing books for us,” Rios said.

A sense of community can be found in the Walpole Library’s Facebook thread, with over 30 replies to its most recent “What are you Reading Wednesday?” call, which invites customers to share the novels they read via the comment feature on the post. Currently, genres range from harrowing romances and harrowing murder mysteries to adventurous fictional tales.

Packard noted that building online communities is evident even in the comments on the library’s recent viral video.

“The majority of those 8,000 comments we have on this video are positive – that in itself is a community.” said Packard. “Libraries exist to help people connect with information, and I’m glad we can do that with the use of things like TikTok.”

Applegate echoed those sentiments, referring to the content they create for the library.

“I am happy to be able to show that libraries are not just a place to rest and read – we are much more than that.”

James Rinker is the digital community engagement reporter for The Keene Sentinel. You can contact him at 603-358-8569 or [email protected] Follow him on Twitter at @JamesRinkerKS.

These articles are shared by partners of The Granite State News Collaborative. For more information, visit collaborativenh.org.