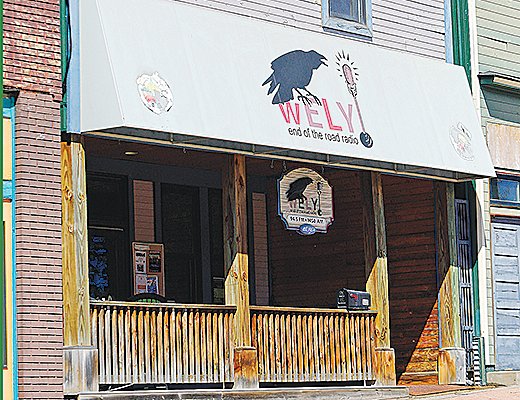 End of the road for Ely radio?

ELY- “End of the Road Radio” has seemingly reached the literal end of the road, tipping into a financial abyss with no emergency relief.
WELY FM 94.5 and AM 1450, Ely’s local broadcast icon with the clever tagline that has been operated by the Bois Forte Band of Chippewa since 2005, will close permanently on June 1 after 17 years of mounting financial losses
“During this time, the staff worked extremely hard to make the station profitable, but despite these efforts, the company lost over $1.7 million. This includes the purchase price when Bois Forte took possession of station in 2005,” Bois Forte public relations director Brian K. Anderson said in a press release Wednesday.
The news began to spread on Sunday after a WELY radio personality announced the impending closure in a social media post about the upcoming end of his show.
Christopher David Hanson, who hosted “Color of my Radio Minnesota Music Hour” on WELY for more than six years, said he was “completely crushed” that the program was coming to an end because “the station is scheduled to shut down June 1. “. .”
“I am sad for the people of Ely and the surrounding communities,” Hanson wrote. “I’m sad for all the bands and listeners online.”
Bois Forte Tribal Council District 1 Representative Shane Drift also responded to a request posted on his official Facebook group page on Sunday confirming that the shutdown was underway. Since his election to the board in 2018, Drift has been a strong advocate for reviewing and improving tribal business practices, including assessing WELY’s financial losses. Drift noted on his page in February that he raised concerns about the station at a meeting of the Bois Forte Development Corporation, indicating that if the tribe cannot sell the station, they should consider to close it.
“I lobbied for the tribe to do better business. It’s a tough call, but it’s a step in the right direction,” Drift said when contacted by the Timberjay on Tuesday. Drift noted that he was speaking on his own behalf and not specifically on behalf of the band or tribal council.
The Timberjay also contacted Bois Forte Tribe President Cathy Chavers and other band officials on Tuesday, but did not receive an official response until minutes before press time on Wednesday.
First opened as an AM band station in 1954 and adding an FM simulcast in 1992, the station has had a long list of owners over the years, and this isn’t the first time WELY has had to difficult to generate income.
The station closed for a month in 1984 due to a lack of funds, but the community responded with a $9,000 fundraising effort to help get the station back on the air.
It took legendary CBS News “On the Road” reporter Charles Kuralt to save the station again when it went bankrupt in 1995. Kuralt, who fell in love with Ely while making a big fuss there at over the years, bought the station at a court-supervised auction and invested thousands of dollars in upgrades. However, Kuralt’s dreams were sadly cut short when he passed away in 1997.
Bois Forte purchased the station in 2005 when Boundary Waters Broadcasters, Inc. put it up for sale.
However, the group’s purchase coincided with a 15-year decline in radio advertising revenue of more than 40% nationally, according to the National Association of Broadcasters.
“We have been working behind the scenes to find a buyer who could continue to operate the station, but our latest plans recently fell through,” Chavers said in the press release. “While we would have preferred to keep the station open in the hope that another buyer would emerge, we had to move forward with this decision.”
WELY staff, which includes one full-time employee and eight part-time employees, were notified of the decision to close late last week.
“We worked behind the scenes to find a buyer who could continue to operate the station, but our latest plans recently fell through,” Chavers said.
“While we would have preferred to keep the station open in the hope that another buyer would emerge, we had to move forward with this decision.”
reactions
“My first reaction was grief and sadness,” said WELY general manager Brett Ross.
“This station has so much history and means so much to the city. The thing is, the people of Ely owned this station and there will be a big void once we get off the air.
As the manager of local public access station Ely Area Television and a former employee of WELY for two years, Todd Crego said the loss of the station would leave a hole in the city’s social and entertainment landscape.
“It’s incredibly sad – it feels like the end of an era in a way,” Crego said. “(WELY’s) Saturday Morning Polka is such an Ely thing.”
Crego said changing technology was a likely influence in the station’s demise.
“It’s so much easier to get just about anything you want when you want it, first with Napster (one of the first digital music file sharing networks), then in iTunes and now services like Spotify , where everything is just available at the click of a button,” he said. “But I still feel like there’s a big niche for a local radio audience. There are just things that are so quintessentially Ely, like doing the kids’ Santa Claus letters every Christmas and the polka show, all those things that are so community-oriented. These are the things I think of when I think of WELY.