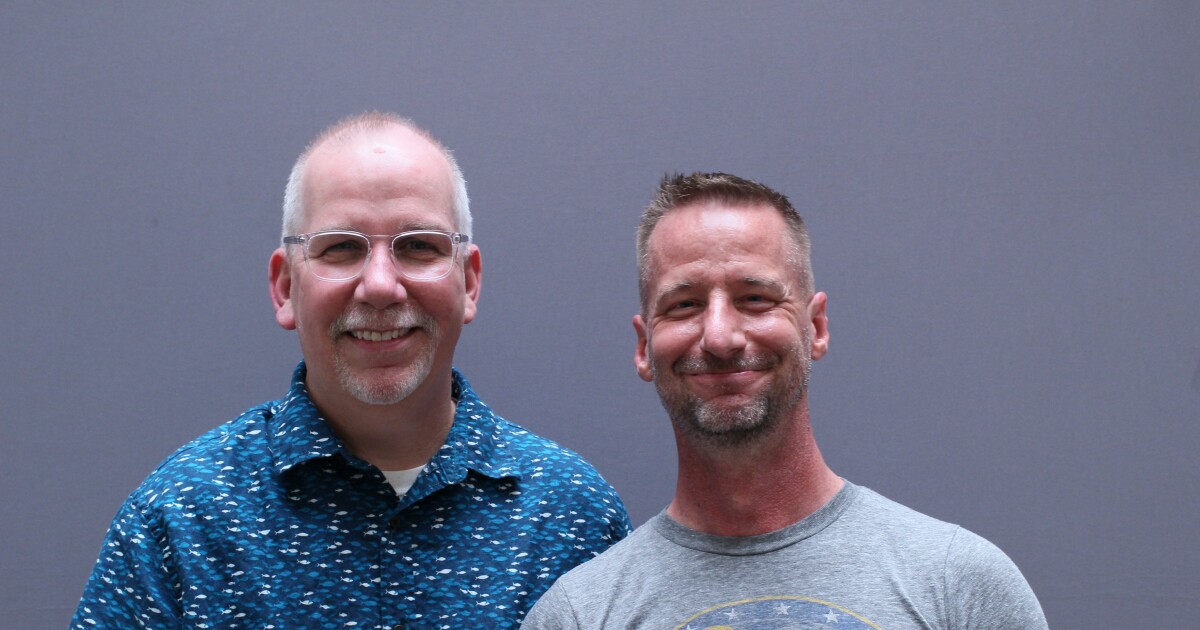 It was just a bite to eat, a way to reconnect with old school friends.

“So we have a fantastic dinner. I mean, it was awesome and I felt something,” says David Pettyjohn. He hadn’t seen Geoffrey Parks since they lost contact after school. They met in eighth grade and were friends in middle school and high school.

And when it was time for their 20-year high school reunion, David wanted to rekindle that friendship, meeting for dinner once a week.

“It was just awesome. You know, we picked up friendship, right? Kinda where we left off. We’re both nerds. We like to talk about maps, all that stuff,” David says.

Then one night they were having dinner at Iron Star BBQ in Oklahoma and “that’s when things took a little turn,” David says.

“Do you remember what I’m about to say?” he asks Geoffrey.

“The waiter just jokingly said, Hey, do you have a date? And I just joked, like, I reached out my hand, and I was like, Oh, honey, is that it? And then what did you say?” David asks again.

“We haven’t defined the relationship yet,” Geoffrey teases.

“And I was like, what? In my head, I say to myself, wait. Geoffrey, is he thinking, what? What? So those kind of open possibilities. So shortly after I said, you know what? I’m just gonna make a move. There are so many questions. I am attracted to him. He seems to be attracted to me,” David said.

So, the next night, “finally I reached out and grabbed your hand and you took it back,” David recalled.

“I remember getting in the car and leaning over you, and we had our first kiss,” David said. “I remember driving back the next day, we held hands the whole way, and it was very sweet.”

After three years of dating, David started thinking about marriage. “I hadn’t planned on this and I just said, hey, Geoff, have you ever considered, you know, how do you feel about getting married? And you said, I’d think about it, but I’d have to be nominated.

So I just said, Geoffrey Bear Parks, will you marry me? Just there. And you said yes.

But the couple had some concerns. “Some of my family members were… they weren’t, what’s the right word? On board. Accepting where my life was,” says Geoffrey.

“And we were making progress,” David said.

“We were making progress,” admits Geoffrey. “My mom and dad would come and have lunch or dinner, and it was nice, you know, kind of rekindling that relationship. But, thinking about all the things that would have to be planned, all the things that would be facing the wedding, David and I have decided to put an end to official grand ceremony plans.

That was the other concern. This was before the US Supreme Court case in 2015 that required all states to grant same-sex marriages. They therefore could not legally marry in Oklahoma at the time.

So they put the big ceremony on hold, as David explains, realizing that “a wedding is not important. We are. So we just said we were going to fly to New York, get married, and then have a lunch.

It was legal for same-sex couples to marry in New York in 2002.

“So, yeah, I flew to New York, had a fantastic wedding, came back to Oklahoma,” Geoffrey explains.

And when we came back, we gave up all the rights and privileges of married couples.

That’s because Oklahoma didn’t recognize their marriage in New York.

“It was this weird feeling of getting on a plane and realizing that all the rights you had were gone when we landed back home,” David explains.

It wasn’t until 2015 that this changed, after the Supreme Court’s ruling that also required states to recognize same-sex marriages performed in other states.

“And Oklahoma had to give us those rights whether we liked it or not. So they did. It was a good day,” says Geoffrey.

David points out that they also had this great reception. “We were about sixty people.

“And to our delight, my parents came for that,” says Geoffrey. “It was important for them to see the friends and family we have that have been supportive of us and our relationship.”

Eventually, the couple came to the Gem State.

Idaho is a quirky place.

“I think we live in a part of town and have a very open and accepting relationship with who we are,” Geoffrey says. “But we have to, I think, exercise a bit of caution in certain contexts.”

“But I will say this,” David said. “I travel around the state for my job. I never hide that I have a husband. And you too, when you travel, you never hide. And we were really lucky not to have encountered that.

But we are always aware of our surroundings.

“So you know. Life. We’ll see where it takes in the future. But so far it’s been a fantastic journey,” says Geoffrey.

“And I’m so excited that we can share our story that we’ve been able to share with friends over the years. So here’s to many, many more years,” David says.