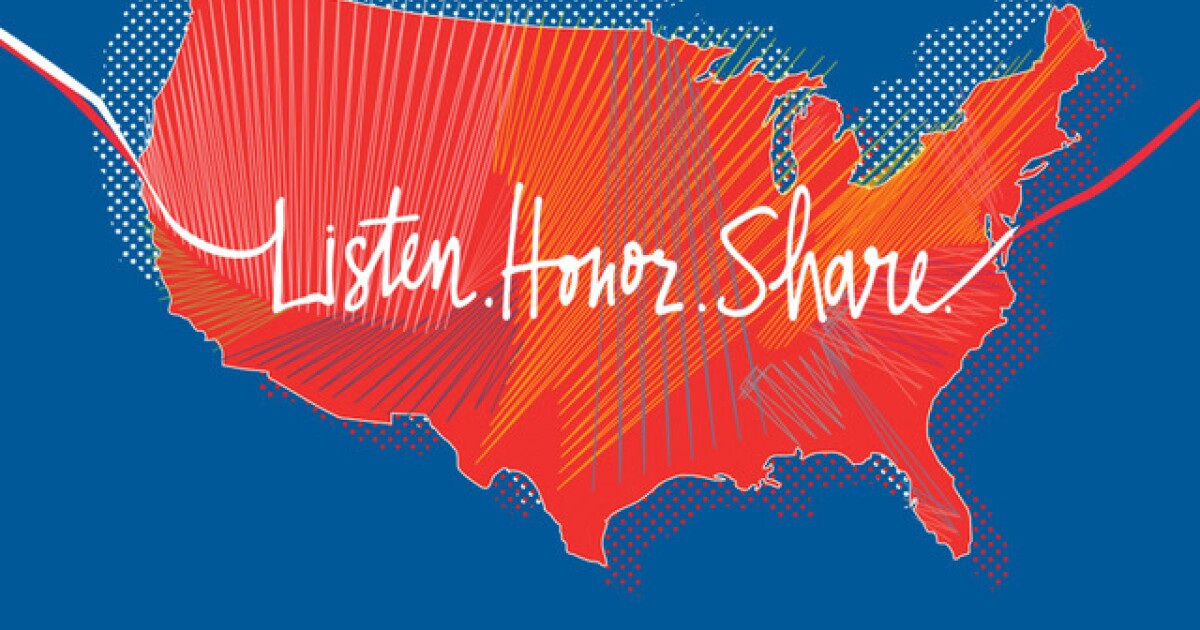 If you listen to VPR every Friday morning, you might be familiar with StoryCorps. The project presents fascinating personal stories between individuals who have a bond or an existing relationship. One Small Step is an offshoot of StoryCorps, with a focus on connecting strangers who lie on either side of a political divide. VPR is one of six stations nationwide that have been selected to conduct One SmalI Step conversations in Vermont communities. Vermont Edition Editor-in-Chief Lydia Brown recently spoke to local producers and project hosts, Betty Smith and Karen Anderson of VPR. Find highlights from their conversation transcript below or listen to the full audio in the player above.

Lydie Brown: Karen, I want to start with you. First off, I’d like you to explain to our listeners the difference between One Small Step and the StoryCorps conversations we are used to hearing here on VPR?

Karen Anderson: After the 2016 election, StoryCorps founder David Isay saw a growing need for a project that could bring Americans together to help counter growing political polarization. In his words, he believes that it is our “patriotic duty to see humanity in everyone”. He therefore developed One Small Step in 2018. The first cohort was selected in 2019, to lead conversations between two people who do not know each other and who come from different political perspectives. The objective was to find common ground, to value each other and to understand each other better. As we get to know ourselves as humans, the hope is that we can eliminate some of this division and break down stereotypes. VPR was chosen as one of six public radio stations across the country this year, along with Alaska Public Media, Valley Public Radio, High Plains Public Radio, KOSU, and KNR. So the goal is really to bring together people who don’t know each other and find common ground.

Brown: Can you tell us more about how VPR was selected to participate in this project? Why specifically Vermont?

Anderson: We had to apply to be considered for this project. And luckily, we have a good relationship with StoryCorps and with our national partners. So they took a serious look at Vermont, and they thought Vermont would be a great place to do that kind of engagement work. It is really above all an oral history project. It’s a community archive, and it’s a great opportunity to hear from listeners and capture a snapshot in time.

Brown: Betty, I want to get you involved in the conversation to tell us more and walk us through the process. Explain to our listeners how you went about bringing together these voices, these stories?

Betty Smith: Well, we’ve posted a notice in different places on our website. And we also placed ads, and we reached out to community partners who we thought would post the notice in their newsletters, and so on. It was a really intensive community outreach effort. We read the little bios that they put together and tried to find some good ones, what they call matches with people who seem to be having an interesting conversation. And there are a lot of different ways to decide how they would interact. You must have an essential difference in political or social opinions. But then we must also look for things that are likely to allow them to come together to have common interests of one kind or another.

Brown: What have you heard from Vermonters about their reasons for wanting to participate? What prompted them to register and what do they hope to gain by participating?

Black-smith: Most of the time what we have heard is that people are worried that we will lose the ability to talk to each other to solve problems. The idea being that if you retreat to a silo, the old echo chamber, you are only going to consider things that you already know, and only opinions and perspectives that you already have. To get things done in a collaborative and democratic way, you need to be able to listen to people with whom you wouldn’t automatically agree. In other words, work your way through the problem in a way that will meet or at least meet the needs of me more people plus a more equitable solution.

Anderson: One thing we have noticed is that the people of Vermont are really hungry for these conversations. Almost 500 people have registered to participate in this program. If you look at the numbers across the country from other participating public radio stations, it’s on average around 75 to 100. So Vermonters want that kind of engagement, they want to have these conversations, which is really encouraging. One thing we hear a lot in the pre-interview is that they want a connection and they want to come out of their bubbles. I think a lot of Vermonters realize that they tend to talk to like-minded people and want to challenge themselves to talk to someone different from them.

Brown: Can you walk us through your process – how do you facilitate these conversations?

Anderson: One of the steps we take is a pre-interview where we call the people who have participated and try to find out a little more about them – what made them sign up and what they hope to win. by participating in a program like this. And we want to know where they are coming from politically, what excites them and what is important to them. As we go along, we discover a little bit about them: their personality, theirs, their hobbies, the things they enjoy. It really helps us in the pairing process, to be able to match them with someone who has different political views but may have similarities in other ways.

Brown: How many conversations have you recorded so far? And tell me about some of the highlights.

Anderson: We recorded about 15 conversations and we have 10 more planned before the end of the year. The goal of the project is at least 25. We are receiving wonderful feedback from participants. The conversations have really been so positive, great connections have been made. We had several conversations where attendees wondered whether to get together for coffee, we had one where someone invited their attendee to their Halloween party.

Black-smith: My favorite moments so far are the two guys, one invited the other to come visit him at his house and walk across the backfield to see his stunt. I thought it was very Vermont. We also had a conversation between two people who are very serious about political opinions and very active in some very serious activities. They found out in the course of things that they were both oil painters, and that they had taken an online course, and that they actually had the same teacher not at the same time, so they didn’t get together. did not know. But, it was a moment of great discovery and surprise, at the end of their conversation. Karen Anderson: Another moment that stood out to me as two participants who come from very different political perspectives, but both love Star wars. They even talked about getting together for a Star Wars marathon. It was just a fun little connection time.

Brown: What is the next step for this One Small Step initiative?

Black-smith: Well, we have to complete the requirements for the grant. This is where the first objective goes. But we are trying to decide how to really respond to this great interest that we have discovered is there. We have a special event coming up. It’s November 18, at 7 p.m. And I hope everyone will sign up to be a part of it. And then beyond. We know there is interest in maybe an initiative we can think about beyond the end of the year, but we don’t yet know what that might be.

Brown: Karen Anderson, Betty Smith, thank you very much for being here for forgiving us the time to tell us more about One Small Step.