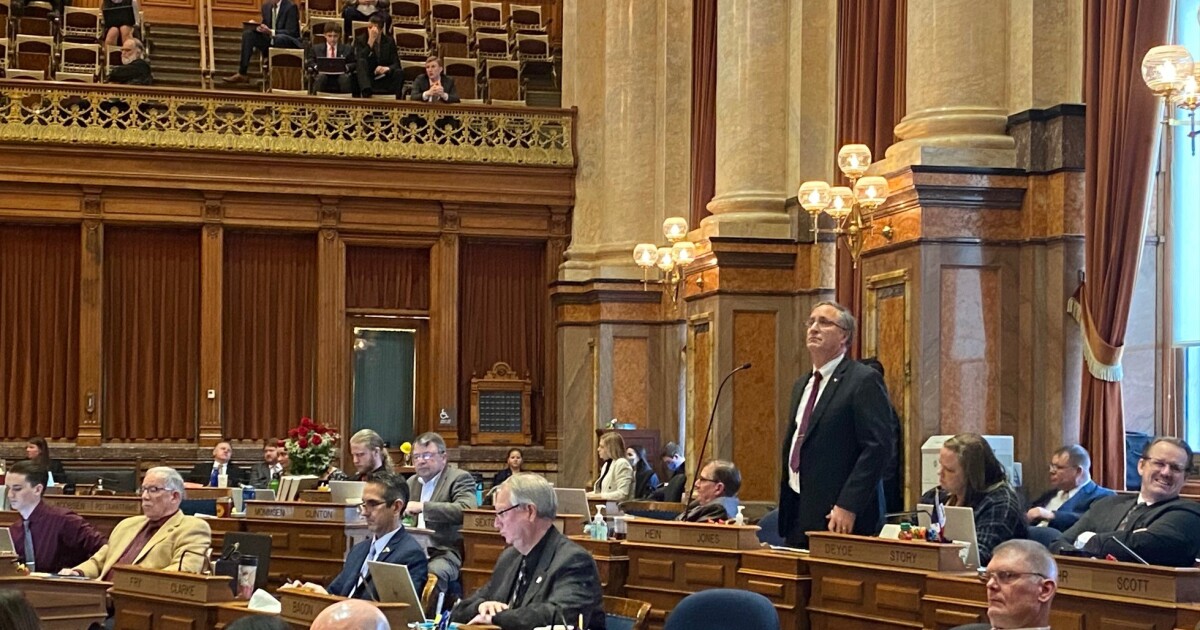 The Iowa House passed a bill On Wednesday, that would introduce a fixed personal income tax of 4% and eliminate taxes on retirement income. It would also provide tax breaks to retired farmers and people retiring from employee-owned businesses.

The vote was 61 to 37, with three Democrats joining all Republicans present in support of the bill.

House Majority Leader Matt Windschitl, R-Missouri Valley, said it was a historic moment. He said the state budget surplus was not the responsibility of lawmakers.

“It’s Iowan money,” he said. “They deserve to get it back. We don’t need to spend it to grow the government.

Several Democrats have criticized the bill, saying the sharp reduction in state revenue resulting from the tax cuts could jeopardize state services in the future. And they said the bulk of the tax savings will go to the wealthiest Iowans.

“It’s kind of a reverse Robin Hood,” said Rep. Dave Jacoby, D-Coralville. “Steal from the poor, give even more to the rich.”

Jacoby also said it’s not really a flat tax, as there are still many tax credits and exemptions.

According to the governor’s office, a flat tax rate of 4% would save Iowa families an average of $1,300. Democrats said the plan would save Iowans less than $20 a year in the lowest tax bracket.

The entire tax plan is estimated to reduce state revenue by more than $1.6 billion in fiscal year 2028 after all parts of the plan are phased in, according to a non-partisan analysis. The state budget for the current fiscal year has been set at $8.1 billion.

“Some of us think all this surplus shows we’re not using taxpayer dollars to raise all the boats,” said Rep. Marti Anderson, D-Des Moines. “To help feed, educate, care for the elderly, care for the disabled, increase our investment in mental health, make sure our nursing homes are inspected, make sure law enforcement have the resources they need to do their jobs.”

Democrats proposed several amendments that were rejected by Republicans.

We would have rejected all parts of the bill, except the elimination of taxes on retirement income and pensions. Another would have preserved the flat tax of 4%, but would have adopted it immediately for the three lowest income brackets, while staggering the reductions over time for the highest rate.

A Third Amendment would only implement the 4% flat tax for people earning less than $1 million.

“A doctor who has spent so much of his time and money on his studies, only to have his high producing years taxed at a higher rate…does that seem fair to you? Not for me,” Hein said.

House Speaker Pat Grassley, R-New Hartford, said projections show the state will have enough money in the future to pay for the House GOP tax plan.

It’s unclear what the Republicans’ final tax plan will look like, as leaders have yet to negotiate.

“A lot of these discussions usually happen towards the end of the session,” Grassley said. “But the fact that we were here, we had the resources to get through this cup, and we had consensus from the [House GOP] caucus, we wanted to shake things up today.

The bill passed Wednesday represents the bulk of Republican Gov. Kim Reynolds’ tax plan. The House GOP bill excludes his proposed corporate income tax cut. The House plan would also use a portion of the Taxpayer Relief Fund to offset the cost of tax cuts, while Reynolds’ plan would reserve those funds in case the economy does not develop as expected.

Senate Republicans also have a different proposal for a flat 3.6% income tax as well as sales tax changes that would fund the Natural Resources and Outdoor Recreation Trust Fund. .

Republican lawmakers also passed income tax cuts last year. These are supposed to start taking effect in 2023. The cuts will be greater if lawmakers eventually approve one of these tax plans.