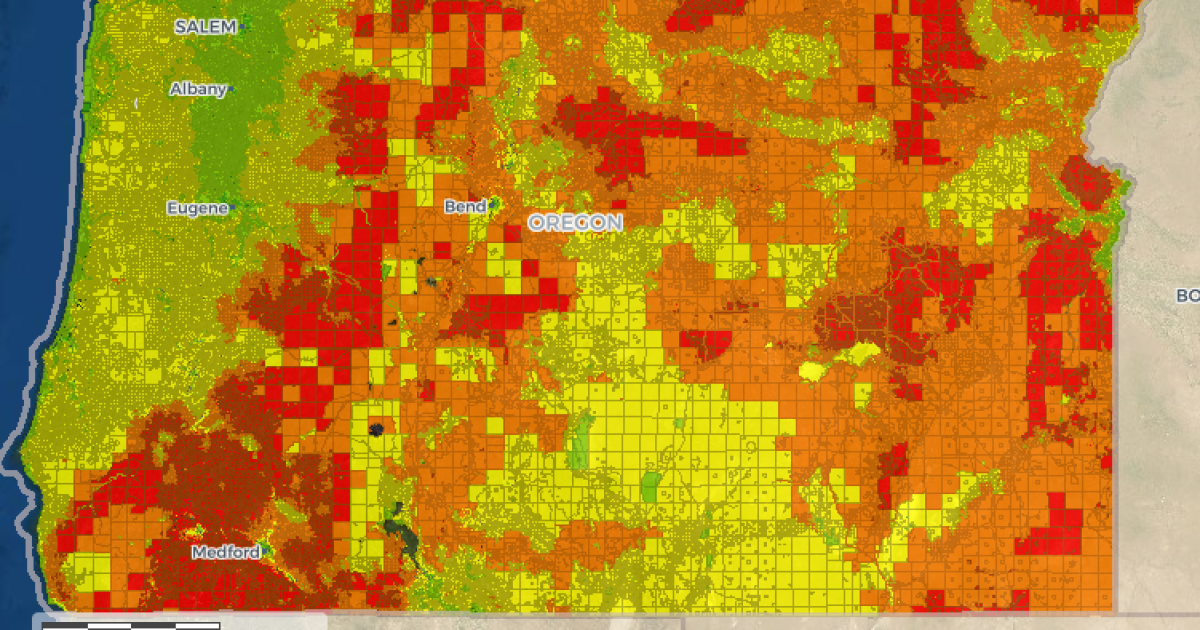 Erik Neumann: So what’s the idea behind these state-created maps?

Derek Gasperini: So the idea, through Senate Bill 762, is to provide an informational tool and an educational tool along with a few other things that allow everyone in the state to understand their wildfire risk and then provide an opportunity and options on how to protect themselves or to mitigate the risk of forest fires. So obviously we’ve had more severe fire seasons in recent years than in the past, the science of fires is changing and Senate Bill 762 responds to the recommendations of the Governor’s wildfire board on wildfire season after 2020 there was a lot of focus on how we are making meaningful progress and updating this information tool with a finer level of detail, risk assessment at the tax batch level so that landlords, tenants, whoever, can access the landlords report via Oregon Explorer and see what risk they have from forest fires, where they live.

FR: So what if you have a home that is now in an extreme or high wildfire risk category?

CEO: Thus, the extreme or high risk designation in and of itself is only an understanding that you are at a higher risk of wildfire vulnerability. If you are in a high or extreme risk area and also within the confines of the urban wilderness interface, then under Senate Bill 762 there may be downstream effects, you may have defensible home space or reinforcement requirements. These are currently being adopted by the Oregon State Fire Marshal and the Building Codes Division respectively, but it is on deck with, in Senate Bill 762. Again, this is just to provide guidance and understand what people need to do to protect themselves from wildfires.

FR: These are public cards. I have heard from residents who are concerned that this will affect their home insurance rates. What would you say to people who have these kinds of concerns?

CEO: I would say first that Senate Bill 762 does not identify anything regarding insurance rates. This is an understandable concern. And I would say that through the rulemaking advisory committee process that the Forestry Department and the Forestry Council went through to get broad input into the generation of the map, there were some assurance issues identified. This was raised with the Oregon Insurance Commissioner. I’m not sure exactly what’s going on there, but again, the purpose of Senate Bill 762 was to identify and help people understand how to mitigate risk rather than introduce risks.

FR: Some rural communities in Oregon or in the case of southern Oregon, in areas like Josephine County, there are areas that are considered “underprotected” because they don’t have administrative districts. financed by taxpayers. How might these kinds of maps influence these communities?

CEO: I’m not sure if these communities have a direct influence on this map. I would say that Senate Bill 762 requires the Forest Department – and this is one of our next efforts to create – essentially a wildfire protection structure across the borders of Oregon, so that it is necessary to establish minimum standards of protection throughout Oregon.

FR: Will there be resources to help residents reduce risk, such as helping them create defensible space or making home improvements?

FR: What’s next now that these cards are out?

CEO: What we hope is that Oregonians will access the map and access their homeowners report, understand what their risk is in their area. We hope that landlords who can rent or lease their property educate tenants, so that everyone understands their level of risk, and that we can all be a little better prepared for future wildfire seasons.

FR: Thank you very much Derek. I appreciate your time.

CEO: Thank you, Erik, for enrolling me in your program.

This interview has been edited for length and clarity.