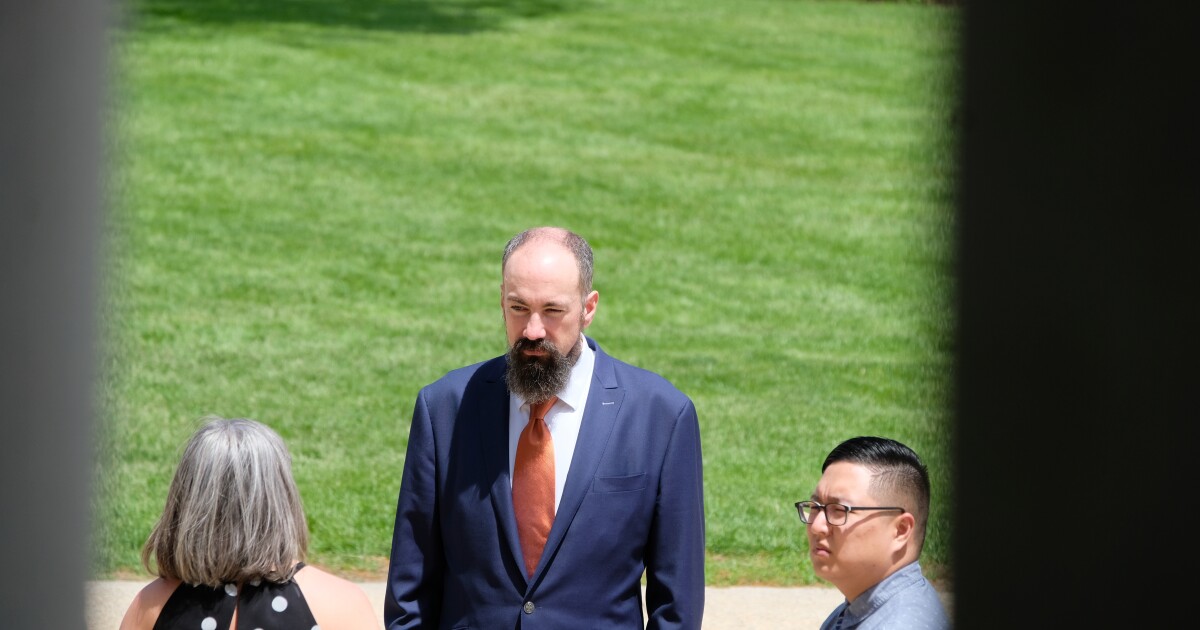 This story was originally produced by NH Business Review. NHPR is republishing it in partnership with the Granite State News Collaborative. We have edited the piece slightly for style and clarity.

When New Hampshire House Majority Leader Jason Osborne, a Republican from Auburn, last ran for his seat in 2020, he bragged on his campaign website that he “brought over 100 good, well-paying jobs to our community.”

Those jobs are now gone.

Osborne’s company laid off the last of its 20 New Hampshire employees on March 2 without notice, as it did with 500 others in its hometown of Defiance, Ohio, and across the country, despite funding $4 million Paycheck Protection Program granted in 2020 to retain employees.

His company, Mammoth Tech Inc. — formerly Credit Adjustment Inc. — is facing a class action lawsuit for failing to give that notice, a lawsuit from its Manchester landlord for failing to pay rent, a $1 million judgment dollars for obstructing a recruitment agency, another $181,000 judgment for disavowing a management company, not to mention two disability discrimination lawsuits filed by a pregnant former employee, one settled and the other In progress.

“They don’t care about their employees,” said Danielle Sullivan, a former Mammoth manager of Raymond, who had a hearing Wednesday morning into her claim of more than $5,000 in back pay and vacation she says owe him.

Sullivan, who worked for the company for 10 years, described working 15-hour days without being recognized.

Jason Osborne fired her via a mass email, in which he announced shortly before noon on March 2 that the company would “lay off” its entire workforce by the end of that day.

Sullivan, who was “the last of the office to survive”, said it was “definitely an ordeal. I had no idea what I was going to do next. We based our lives on our two incomes.

But it wasn’t the worst thing that happened that day, she said. An employee threatened to commit suicide.

“Osborne knew exactly what he was doing. I reached out to him on company teams, on Facebook, basically begging him for our vacation pay,” she said. “He didn’t show any compassion.”

“A lot of things will come out in the future, not everything you’ve heard. Truth and justice will win.

Michael Osborne, who founded the company in 1964 and is still its CEO

“Then I won’t talk,” he said. “But a lot of things will come out in the future, not everything you’ve heard. Truth and justice will win. God bless you.”

In the company documents, Michael is listed as company president and Jason as director. Lisa Bloomfield, Jason’s sister, is listed as another officer. Bloomfield, according to multiple sources, retired from the company, and Jason – as evidenced by his name at the bottom of the mass layoff email – took a much more active role in the company, said Rachel Youngker, a manager who worked for the Ohio Bureau for 11 years before she was also fired on March 2.

“Jason kind of took over a year ago and kicked everyone else out. There were two more presidents after getting rid of Lisa. There was a lot of family drama,” Youngker said.

According to sources close to the company, Michael and Jason Osborne hold 90% ownership of the company and 100% of the voting shares.

The company started small – six employees when it was founded. But it quickly grew in 2015 as one of 11 companies the U.S. Department of Education Default Collection Services contracts with and was awarded a five-year renewal in 2019, according to a press release from 2021 released after the company changed its name to Mammoth Tech. Inc.

The value of those contracts peaked — about $70 million — in 2020, according to the USAspending.gov website.

It was in 2015 that she entered into an endowment agreement with Firstsource Advantage LLC, located in Amherst, NY, which would help provide collection services to help pay off student debt.

In those heady days of early 2020, the company opened a new headquarters in Defiance, which donated 24 acres for its expansion, and gave it additional tax relief on its property taxes to help fund infrastructure.

The building cost about $3.5 million, Youngker said. Some 220 people worked there before COVID hit.

The lease for the Manchester office at 228 Maple St. began in 2013, and after 2015 the company expanded, taking up two additional floors in the building, according to a lawsuit filed by building owner ZJIBV Properties LLC.

It’s unclear how many people worked there before COVID. Osborne, on his campaign website, said he created 100 jobs. Some put the number at 150 or even 200 instead. But in March 2020, the workers there, like so many others, walked away. And they never came back.

Also in March 2020, the Ministry of Education introduced a moratorium on the collection of student debt. And at some point – no one knows exactly why or when – the company lost its loan collection contract.

“The DOE just pulled it,” Youngker said. The DOE did not respond to questions in time.

Soon – despite the $4 million PPP increase in April 2020 – the layoffs began. By the first quarter of 2021, the New Hampshire office was down to 80 workers, according to the state Department of Labor.

Some workers moved on to other contracts, which Sullivan said were called BPO, or business processing outsourcing. She helped North Carolina process its unemployment claims. Then there was the Chipotle restaurant chain contract, a customer service job.

“Primarily, we were dealing with customers who were unhappy with their food or their delivery drivers. It’s not the most fun job in the world,” Sullivan said. In Defiance, callers did much the same for Mexican food chain El Pollo Loco.

The name change had marked a shift away from debt collection. So did the hiring of Hutter Capital Partners International Inc., a Barbados-based firm contracted to provide “an initiation study focused on optimizing people, process and technology at sites under -treaties and company sites,” according to its complaint against Mammoth.

The following month, Mammoth outsourced an operations director position to Hutter, to “support the organizational delivery of its short- and long-term strategic plans” for $100,000 plus disbursements.

The moves did not keep the business alive.

In New Hampshire, Mammoth’s dispute with its owner began early.

In August 2021, he notified ZJBV Properties that he was leaving the properties and no longer paying rent, citing a breach of HVAC maintenance obligations, which the landlord denied. Discovery was supposed to start in April, but Mammoth hasn’t responded. In June, she too requested a default judgment, and the judge gave her until Tuesday before granting it. On Tuesday, the judge dismissed the default judgment, but ordered the company to begin answering questions from the owner in early August.

In the class action lawsuit, filed in federal court in Ohio, Theresa Leinger, an employee, alleges that Mammoth violated the Worker Adjustment and Retraining Notification Act (WARN) for failing to give workers the required 60-day notice. before a layoff. The complaint includes all 520 workers, the 60 who were in the Ohio office and all remote workers. He is asking for two months’ salary, plus return allowances and vacation pay.

In his mass email, Jason Osborne alludes to the WARN Act, but said the 60-day notice “was not possible in these circumstances as the company was actively seeking capital or business which, if they had been obtained, would have allowed the Company to avoid the shutdown. Management believed that if we had given such notice by March 2, 2022, it could have affected the Company’s likelihood of success in its efforts.”

He gave the same reason to the Displaced Workers Unit of the Ohio Department of Jobs and Family.

New Hampshire also has a state WARN law. But since there were fewer than 100 workers in the state, that doesn’t apply, Deputy Labor Commissioner Rudy Ogden said. If so, the exception that the business itself did not know it was closing until the last minute could apply. But as soon as he found out, he had to give notice.

There are indications that Mammoth knew about it, at least a few days before. In an email, Youngker said she learned in late February from some senior executives who had let slip that the company would close on March 18.

“It was very clear that they were closing and there was no possibility of reopening,” she wrote in an email.

But Youngker also wrote that “it was made very clear that if word got out, Jason and Mike said they would sue anyone who leaked the information.” She said she posted it anyway.

“Then Jason found out that people knew about the business closing and that’s when he sent the email terminating everyone,” Youngker wrote in a post. E-mail.

In an interview, Youngker said, “they were so wrong with us.” She was considering leaving the company, “but they begged me to stay.” A month later, she was fired.

These articles are shared by partners of The Granite State News Collaborative. For more information, visit collaborativenh.org.