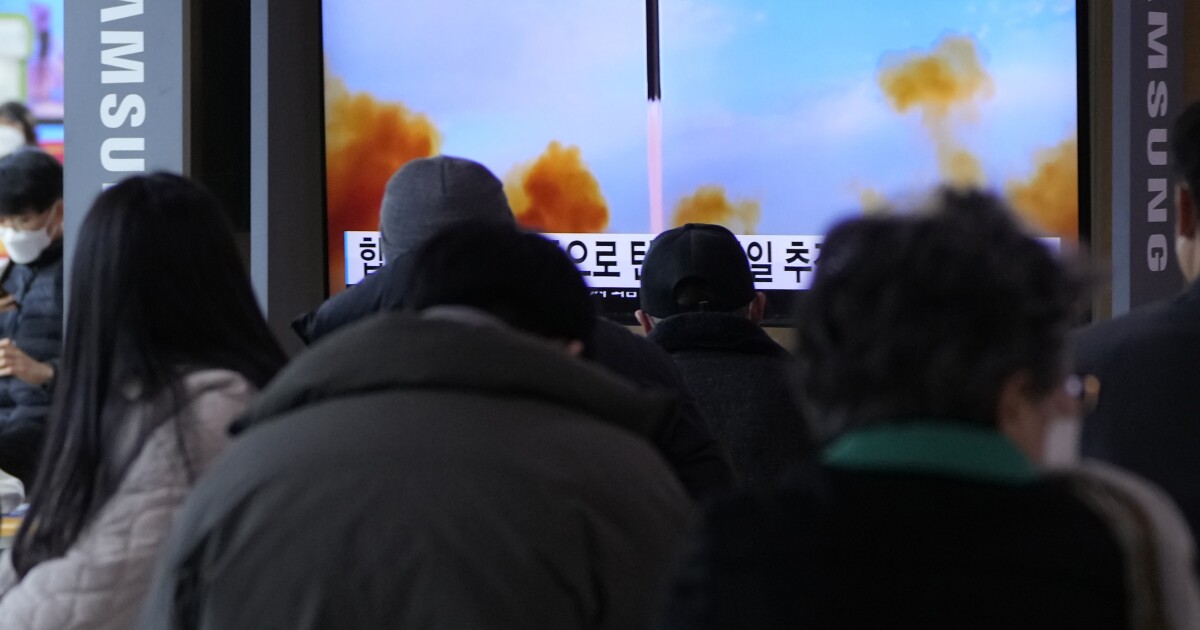 SEOUL, South Korea — North Korea fired a suspected ballistic missile into the sea on Saturday, according to its neighbors’ military, apparently extending its round of weapons tests this year amid a prolonged freeze in nuclear talks with United States.

South Korea’s Joint Chiefs of Staff said it detected a single launch of a suspected ballistic missile from an area near the North Korean capital of Pyongyang into the country’s eastern waters, but it did not immediately specified the distance traveled by the weapon. The Japanese Ministry of Defense has also assessed the weapon as potentially ballistic.

The Japanese Coast Guard warned ships that an object they described as a potential ballistic missile may have landed in waters between the Korean Peninsula and Japan, but no damage was reported in the immediate.

South Korea’s presidential office said national security adviser Suh Hoon would chair an emergency meeting of the National Security Council to discuss the launch. There was no immediate comment on the launch from the US government or the military.

It was North Korea’s ninth round of weapons launches in 2022, as it continues to use a pause in diplomacy to expand its military capabilities while trying to pressure the Biden administration to secure concessions.

The launch came as South Koreans lined up at polling stations on Saturday morning to participate in early voting ahead of next Wednesday’s presidential election. The vote follows months of bitter campaigning in which the two main candidates have clashed over whether South Korea should continue its engagement with the belligerent North or take a harder line to control its nuclear threat. .

The latest launch came about a week after South Korea and Japan said they detected the North firing a ballistic missile on Sunday that traveled about 300 kilometers (190 miles) at a peak altitude of around 600 kilometers (370 miles). The North later said the launch was designed to test a camera system it planned to install on a spy satellite under development.

The North’s other tests this year included a purported hypersonic missile and its first launch since 2017 of an intermediate-range missile potentially capable of reaching Guam, a major US military hub in the Pacific.

Analysts say North Korea could up the ante in the coming months and possibly resume testing of major weapons like intercontinental ballistic missiles as it tries to move the needle with Washington, which is now concerned about the invasion of Ukraine by Russia and regional competition with China.

At a conference of the ruling Workers’ Party convened by North Korean leader Kim Jong Un last month, members of the Politburo made a veiled threat to resume testing of nuclear devices and ICBMs, which Kim had unilaterally suspended in 2018 to make way for diplomacy with then-President Donald. Asset.

But negotiations continue to be derailed after Trump and Kim’s failed second meeting in February 2019, when the Americans rejected North Korea’s demands for major sanctions relief in exchange for dismantling a nuclear facility. aging, which would have represented a partial surrender of its nuclear capabilities.

The Biden administration has offered open-ended talks with Pyongyang, but has shown no willingness to deliver much-needed economic benefits unless the North takes real steps to reduce its nuclear weapons and missile program.