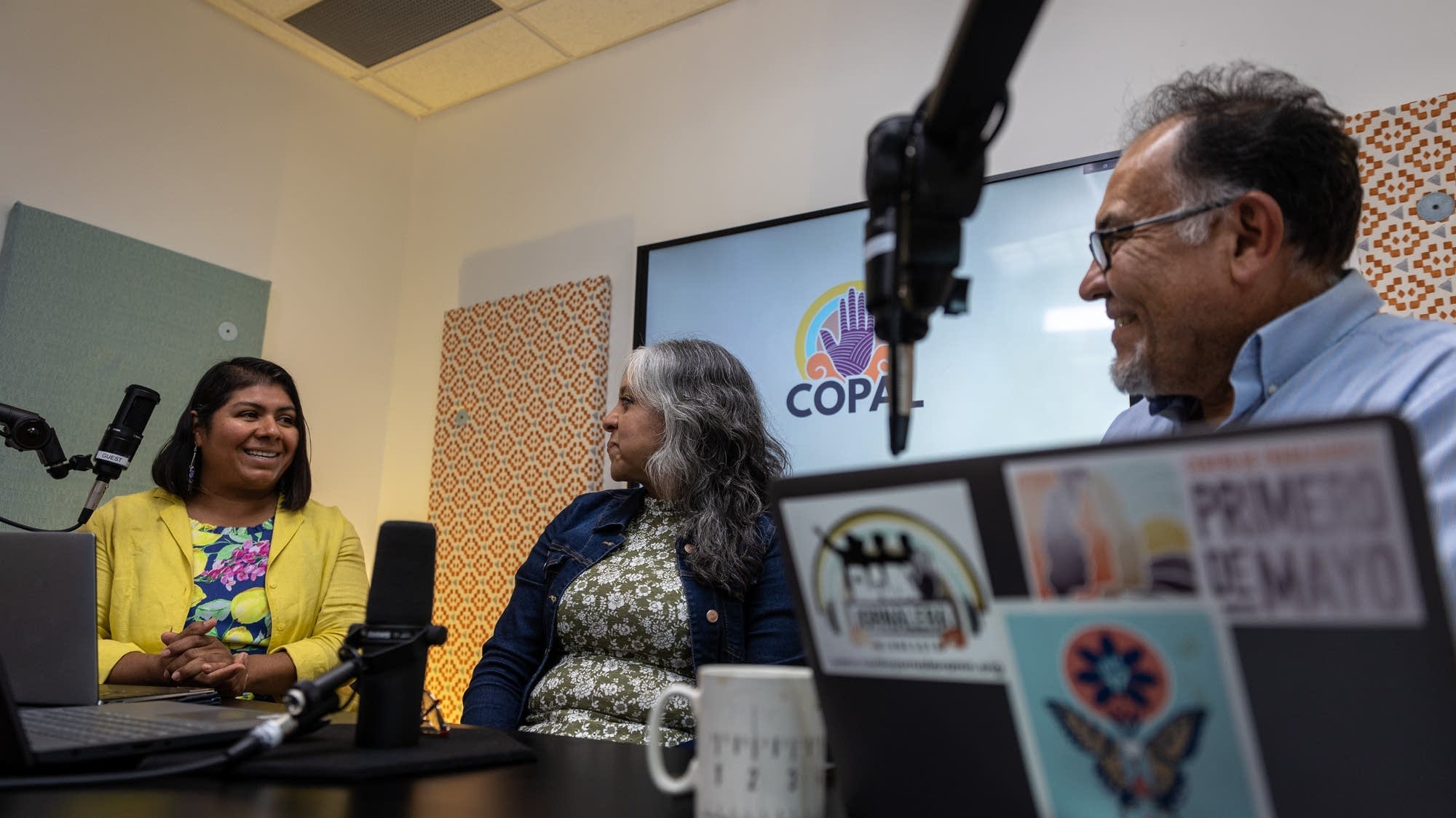 Nestled in an office corner of COPAL Minnesota, Francisco Segovia and Claudia Lainez discuss with their guest the show they are about to record.

Segovia and Lainez co-host the Radio Jornalera program Entre Mundos — Between Worlds. Their guest, Rita Robles, returns to Mexico, so they pre-record the following week’s show. Robles, who works for Alianza Americas in Mexico, will discuss forced migration.

Radio Jornalera began broadcasting in Minnesota in October 2020. But it has its roots in Pasadena, California. It is part of a network that covers the whole country as well as El Salvador and Guatemala.

And it started as a way to get information out to day laborers, so they could know their rights and know where to turn for help when needed, Segovia said.

He said the network contacted COPAL to see if it was interested in opening a station in Minnesota.

Lainez said each station focuses on issues relevant to the region in which it is located.

Before you continue reading, take a moment to donate to MPR News. Your financial support ensures that factual and reliable information and context remain accessible to all.

“I believe that many of the issues that we deal with, not only on Entre Mundos but on the other programs, are meant to let the community know what’s going on,” Lainez said.

She worked at Radio Jornalera in Pasadena before moving to Minnesota. Lainez said they would discuss policy issues that impact immigrants and their children — like DACA and TPS. And during the pandemic, being able to share information through Radio Jornalera was vital.

“And we saw at that time that Radio Jornalera was like a vehicle that allowed us to reach many people through an app or through the programs on Facebook,” Lainez said.

Entre Mundos is just one of seven programs that air on Radio Jornalera Minnesota Monday through Friday, including a daily program that airs from 7 a.m. to 10 a.m. weekdays.

Currently, Radio Jornalera Minnesota and its various programs can be listened to live by downloading the application. Segovia said that in the future they hope to have a podcast where the various shows can be made available.

The idea behind Entre Mundos is that many people, especially immigrants, live in dual worlds, Segovia said. That’s especially true for first-generation immigrants who often feel like they’re not from here or their country of origin, he said.

That’s why they make shows focusing on topics like transnational issues, he said. For example, the show with Robles focused on how factors like climate change are forcing people out of their homes. But the show’s topics also touch on issues closer to home.

They also ensure that the issues and voices they cover reflect all the different ethnicities within the Latino community.

“So I think in that sense, the diversity of voices that we have on this radio is reflective of our community,” Segovia said. “We have voices from Central America, voices from Mexico, voices from various countries. It’s the intention that people can hear each other.”

Vicki Adame covers Latino communities in Minnesota for MPR News via Report for Americaa national service program that places reporters in local newsrooms to report on under-reported issues and communities.