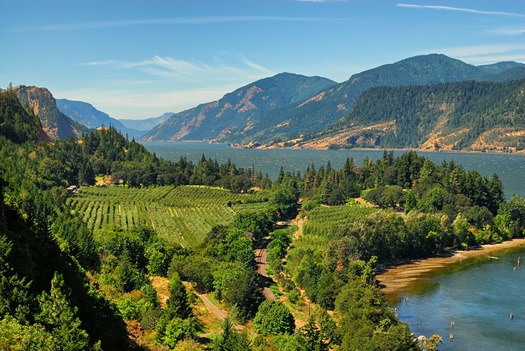 A unique radio station in the Columbia River Gorge provides news in English and Spanish, on topics ranging from the environment to immigration.

Radio Tierra is a small community station in Hood River serving farm workers who are mostly from Mexico and live on both the Oregon and Washington sides.

“Its purpose is to reach out to this community and talk about environmental and social issues that are happening in our communities, and for them to understand how climate change or environmental crisis is affecting our communities,” said Ubaldo Hernandez, host. of a broadcast on the station. called “Conoce Tu Columbia.”

Hernandez addresses a range of issues on his show, such as the effects of pesticides on health and water quality in the Columbia, and how people can get involved in the solutions to these issues. He is also the main organizer of the Columbia Riverkeeper group.

Leti Moretti, a Radio Tierra volunteer who hosted her own show, said the station provided a way for people to get involved in their community. Moretti said she would use her show to talk about topics like COVID-19 and immigration and to dispel misinformation.

“We know that information in Spanish comes much later than for the English language, and the same goes for misinformation,” she said. “To correct it, it takes about four times longer to correct in Spanish than in English, because there aren’t as many checkpoints.”

Moretti said Radio Tierra has a special relationship with the region it serves. People called on his show just to say they lost their wallet at the grocery store and needed help finding it. She said someone called once to say a family’s fridge had broken down.

“It took less than 60 minutes before someone called me and said, ‘We have a refrigerator in the back of our truck. Just let us know where we need to deliver it.’ They had an extra one in one of the orchards they delivered to this family,” she said. “So that kind of magic was really cool to see.”

Moretti said these are not all serious conversations on Radio Tierra. When a request comes in to lighten things up, the deejays are happy to oblige with some upbeat tunes.

Disclosure: Columbia Riverkeeper contributes to our fund for endangered species and wildlife, environmental, water reporting. If you would like to help support news in the public interest, click here.

As Black History Month continues, the effects of environmental injustice are integrated into conversations about how black communities are being left behind, including in Minnesota.

Even before the current racial reckoning, Minnesota drew attention to stark disparities in education and wages.

Minister JaNaé Bates, group communications director, ISAIAH, said climate issues are no different, noting that Minnesota has abundant resources to ensure everyone can live in a safe and healthy community, but policy and planning decisions over time have left out some black populations. .

“We deserve to have, you know, clean air, clean water, healthy land,” Bates pointed out. “What we found is that this is often not the case.”

She pointed to the St. Paul’s Rondo neighborhood and north Minneapolis as areas suffering from interstate construction and heavy industrial environments. The Biden administration has prioritized environmental justice in the new infrastructure law.

She argued that the gap goes beyond whether the programs are affordable.

“Not just the financial means,” Bates explained. “But that they know what’s going on when you consider that low-income families often work multiple jobs and usually don’t have the time or space to absorb all that is going on in civic life around them. ‘them.”

She added that black-led groups are doing their part by raising awareness of climate issues in their communities.

Bates pointed out that environmental racism may be linked to other historical inequalities in black neighborhoods, and while it may take a long time to fully overcome the barriers, she argued that the recent history of political will gives hope.

“When COVID-19 became very big and very real in our lives, a lot of laws were passed that people had been working on for years,” Bates remarked. “It was able to pass almost in the blink of an eye, as we recognized the urgent need.”

And with more urgency behind environmental issues, she hopes this will translate into expanding types of infrastructure to make marginalized communities more climate resilient.

Commerce City residents living in the shadow of the Suncor refinery are asking the Environmental Protection Agency to deny an emissions permit recently renewed by Colorado regulators.

Lucy Molina lives near the facility and is a Suncor neighborhood organizer with the 350 Colorado group. She said the EPA finally has the opportunity to hold industrial polluters accountable and respond to calls from communities to protect their health.

“They make billions and I have cancer,” Molina said. “We are the most polluted postcode in the country. It’s not something we can be proud of. And it’s time for the community to wake up, fight back and protect the future of our children and the future of our planet.”

Suncor has a long track record with regulators. The EPA reported that the refinery has been in “significant violation” of clean air and water laws and federal toxic substances disposal laws for every quarter of the past three years.

A Suncor representative said by email that the company continues to make improvements to reduce its environmental impact and cares deeply about the communities surrounding the Commerce City refinery.

Environmental groups are also urging the EPA to reverse what they see as a decades-long injustice against the surrounding, mostly Latino community. Molina is a single mother who said she would like to move her family away from what she calls her “deadly neighbor”.

“It’s not as easy to get up and go,” Molina said. “I mean, I can’t afford it either, you know what I mean? Transitions just have to start in communities like ours that have been carrying the heavy, stinky burden of all these polluters for decades, really.”

Communities of color in Colorado and the United States live disproportionately close to industrial polluters, largely because fliers were the only places they could find housing due to redlining and other policies.

The EPA’s Region 8 office has 45 days to review the permit renewal after Colorado officials handed in the proposal on Feb. 8.

Disclosure: 350 Colorado contributes to our fund for reporting on climate change/air quality, environment, environmental justice, social justice. If you would like to help support news in the public interest, click here.

Last month, the group rallied at the state Capitol, calling on the General Assembly to pass legislation establishing a 17-member commission that would draft a new climate action plan for the state.

“Youth activism is, and always has been, a crucial factor for meaningful social change,” Curran said. “Civic engagement is no stranger to this generation.”

The Elkhart High School Pennant reports that the bill stalled before the Senate Environmental Affairs Committee, where it has yet to receive a hearing. Sen. Mark Messmer, R-Jasper, chairman of the committee, told the Indianapolis Star that the measure is redundant and that its goals can be achieved through another committee or the 21st Century Energy Task Force. ‘State.

The Pennant reports that the Senate bill and a companion resolution, which is also stalled at the Environmental Affairs Committee, were drafted with student input.

“Is there anything, any subject, more important than the air we breathe and the water we drink? I don’t think so,” Alting said.

In addition to the task force, the Senate bill would also require the state’s Utilities Regulatory Commission to release a report forecasting Indiana’s utility companies’ greenhouse gas emissions for each year until 2050.

In a 2020 poll conducted by the Pew Research Center, nearly two-thirds of respondents indicated that climate change was affecting their local community in some way.

This story was produced with original reporting by Elena Krueper, a high school student on Earth Charter Indiana’s youth environmental press team and published in The Elkhart High School Pennant.

The public radio show and podcast “Selected Shorts” gets the first permanent host in a decade. | story