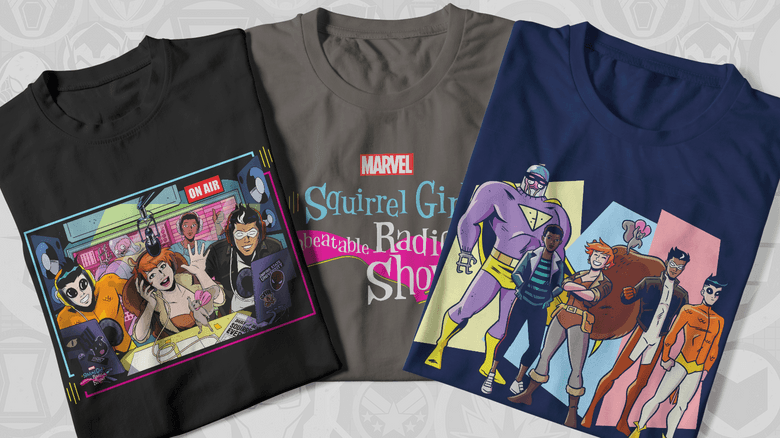 It’s time to kick ass and eat nuts! All 6 episodes of the all-new original scripted series Marvel’s Squirrel Girl: The Unbeatable Radio Show! are now available on all platforms where you listen to your podcasts!

To celebrate all things Doreen Green (and Tippy-Toe), new apparel, accessories, and more have arrived on Amazon to take your favorite radio host with you, whether hanging out with friends or battling foes.

Squirrel Girl has defeated Thanos and Doctor Doom, but now she faces something far more terrifying… living authentically. The new series follows Empire State University student Doreen Green, who was recently unveiled as a superhero – The Unbeatable Squirrel Girl! Hoping to unify her personalities in the public eye, Squirrel Girl created a new student radio show on ESU’s own college station. With the help of her best girlfriend, Nancy Whitehead as producer, and her squirrel best friend, Tippy-Toe in the booth, Doreen is ready to help more people than ever with her best superhero tips. And when the going gets tough, she can always lean on her heroic friends: Iron Man, Spider-Man, Chipmunk Hunk, Koi Boi and Brain Drain.

However, with a phone show comes caller anonymity and not everyone online wants help – some want to commit crimes – and commit tough crimes! When a suspicious caller wreaks havoc in New York, Squirrel Girl and her friends will have to put their heroism to the test and prove that once and for all, Doreen Green is THE UNBEATABLE Squirrel Girl.

Shop all of Squirrel Girl in the image gallery below and listen Squirrel Girl: The Unbeatable Radio Show! wherever you find your podcasts – find out more at Marvel.com/SquirrelGirlPodcast