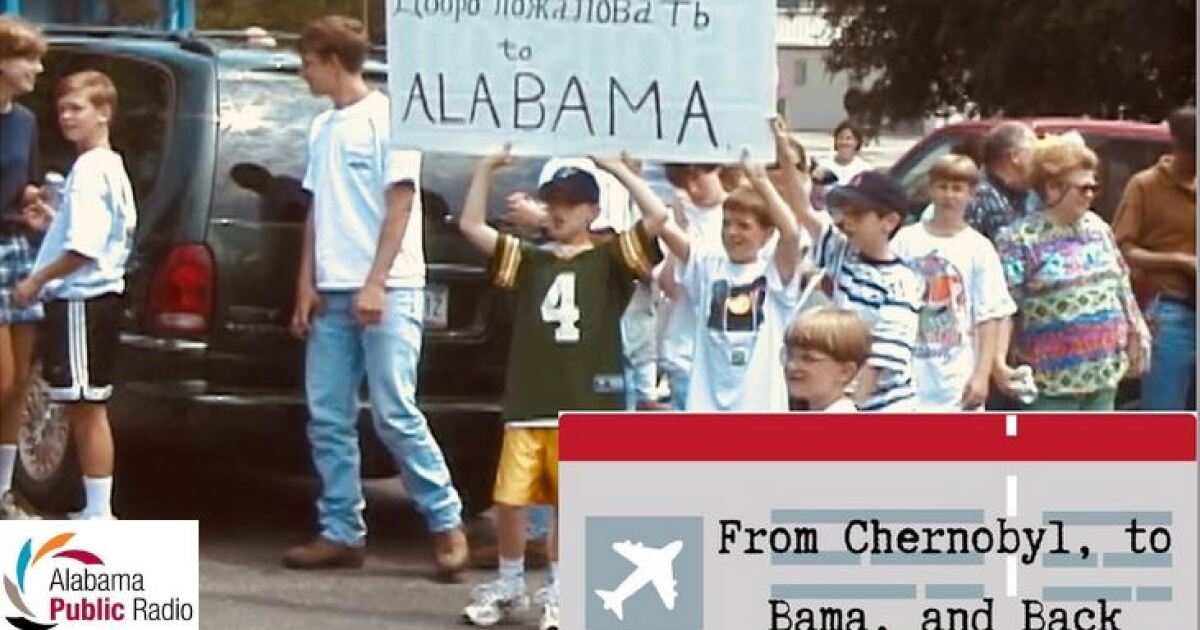 
Alabama Public Radio celebrates its fortieth anniversary this year. Throughout 2022, the APR news team will present encore shows from the best of the best in our award-winning national stories. Our last dates from last year. Vladimir Putin’s war on Ukraine stands in stark contrast to what parents in the former Soviet nation of Belarus did in 1999 and 2000. That was when parents in this former communist country trusted outsiders to Alabama to shelter their children after the Chernobyl nuclear power plant disaster in 1986. Here is a further introduction to part two of APR’s series titled “From Chernobyl, to Bama, and back.”

In April, we met with the Lee family from the town of Pelham. They took in a 9-year-old boy from the Belarusian nation in the year 2000. Belarus is just north of where the Chernobyl power plant exploded in 1986. It’s also where a lot of radioactive fallout has drifted . Alabama Public Radio and the University of Alabama Public Television Center collaborated on the story about how children from Belarus were brought to our state for visitation beginning in the late 1990s. Here’s how it all started.

“He was pretty shy around us, for quite a while,” said Susan Lee of Pelham, Alabama.

“He was always happy. He was a boy. He had a mischievous side. But, it was still fun and happy,” Lee said of Ivan.

He was only 10 years old when he traveled to Alabama in 2000, and at that time he spoke no English. Ivan Kovaliou and kids like him flew to Alabama from the former Soviet nation of Belarus. After changing planes in Frankfurt, New York and Atlanta, they boarded buses for a two-hour journey to Birmingham.

They all look a little tired as they wave to the camera for this 20-year-old video. Everyone wears a red baseball cap. The organizers didn’t want them to get lost in the crowd waiting for them.

When each child gets off the bus, they are greeted by families holding signs with slogans like Welcome to Alabama written in Russian. At first, the young people wearing their red caps are grouped in one group, and their host families in the other. Everyone seems a little uncertain about what’s next. Then, little by little, everyone is paired up. Instead of taking the kids, the families spread blankets on the grass near the parking lot for a picnic to get to know each other. In his case, Lee knew that Ivan had come a long way for this all-American lunch, and why.

“It wasn’t until many years later that I realized the magnitude of the disaster and the long term impact it had…and continues to have…and will continue to have…for years to come. come,” she said.

Ivan and these other young people are known as the Children of Chernobyl. About 60% of the Soviet nation of Belarus was contaminated by the nuclear power plant disaster. Thyroid cancer cases have increased tenfold in areas affected by the Chernobyl fallout. This includes young people of Ivan’s age at the time.

The United Methodist Church created the Children of Chernobyl program in Alabama. This meant free medical care and a chance for these young people to be safe from the threat of radiation. Still, Lee said it meant a big leap of faith for Ivan’s parents to let him come.

Church leaders in Alabama also knew it was a big ask. And they needed someone who knew Russia firsthand to lead the way.

“As I had lived there before and been involved in different projects, I felt I could add something to that,” said Patrick Friday.

Friday was in seminary to become a Methodist minister in Alabama. But that wasn’t the only thing on his resume. Friday produced documentaries for Alabama Public Television and wrote stories for CNN. And, there was one more thing.

“I went, right out of college, with a group called Education for Democracy,” Friday said. “So my job was to be available in the Baltic countries. To help. It was still the Soviet Union. And people were interested in ‘What is democracy?’ ‘What is freedom?’

That was before the fall of communism in 1991. Today, Friday was back in the post-Soviet nation of Belarus on a more delicate mission. These tottering children may soon be heading to the United States. But on Friday, they would first have to convince their parents. Friday asked local leaders what he could do to build trust that could lead to the Children of Chernobyl program. They said to bring winter coats for the kids.

He shot a video in 1996 while carrying large clear plastic bags into a house. They were full of coats donated by parishioners in Alabama. First, a little girl of about 5 years old shows up. Friday rummages in his bag like a skinny young Santa Claus. He pulls out a small blue coat with a plaid lining. The little customer tries it on and responds with a smile.

An older girl, named Sasha, stays behind. She seems uncertain. Friday pulls out a black coat and holds it. He gets no reaction. More digging leads to a purple jacket with patches of green and black. Sasha seems to be warming up to this one. She tries it on and keeps it.

Many meetings and many coats later, the crowds around Friday began to swell. A local school even hosted a reception. The children were dressed in white. Their costumes are embroidered in red and green, the national colors of Belarus. And there are a lot of intros. The parents spoke on Friday about their children, where they went to school and what they like to do. Some would drop soft hints, as if he would be no problem.

“And that’s when we said we were looking forward to having them come to us,” Friday said, “to fly to Alabama and stay with us.”

But, despite the smiles, handshakes and songs, Friday knew a tough time was coming. It was then that these families gathered at the main airport in the Belarusian capital of Minsk to say goodbye.

“Think of your own children, say they are 7 or 8 years old, in a foreign country to people you don’t know. So that was the look on their face,” Friday said.