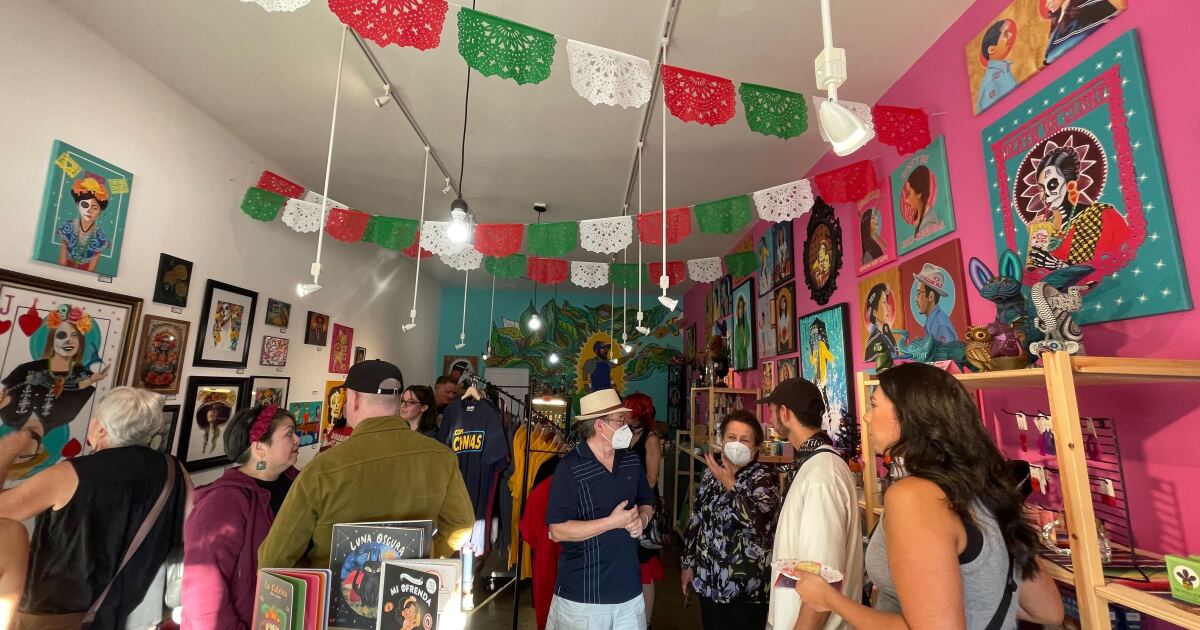 The Nepantla Cultural Arts Gallery opens its walls to all

Jake Take jokes that he had to come to Seattle to find a girl from LA. Artist, Take moved to Seattle in 2015.

As a child, Take loved art. He remembers being obsessed with recreating designs from his Disney books. But in high school, he was told his art was “too ethnic” and “too gangster.” He was drawing lowriders. So he stopped.

In college, he took a course in Chicano Studies and realized there was a space for the art he loved to create. When he moved to Seattle, he decided to focus on his art and quit his day job. By getting involved in the local artistic community, he had the idea of Nepantla Cultural Arts Gallery.

“I quickly discovered some incredibly talented Latin artists, but no one was showing together. There was just this kind of disbursement of artists, like nothing brought us together,” Prendez said. “There wasn’t that physical space and yeah, we just knew we needed it for the community.”

Judy Avitia-Gonzalez is the “LA girl” Prendez met who helped make Nepantla a reality. The two are now engaged.

Avitia-Gonzalez moved to the White Center as a child, so when Prendez pitched her the idea of ​​starting a gallery that would be steeped in Latin arts traditions, she knew it had to be in the neighborhood.

“There are a lot of immigrant families, first generation, young people like me who have parents who have emigrated here. And I just knew we needed a space where people like me and my children could be. feel included,” Avitia-Gonzalez said.

Take also pointed out that White Center is part of unincorporated King County, which means the neighborhood doesn’t receive the same resources and funding as other parts of Seattle. That’s why in Nepantla, they are on a mission to create artistic opportunities that are accessible to the local community. They host art workshops, run small businesses, host guest speakers, and even open mic nights.

Take remembers a moment when a family with two small children, a mother and a father and a grandfather entered the gallery. At first, the grandfather looked like he had been dragged there. But then he started looking around.

“This guy, probably his whole life, hasn’t seen art that depicted him,” Prendez said. “But he came here, he saw art that reflected that and it made him happy and he had this big smile. It made me feel so good that he understood that and he feel embraced in this space.”

The gallery accepts art from anyone who submits, at this time they are only limited by wall space. This means an established artist could have their piece next to that of a 12-year-old. Take said that it is often the 12 year old coin that will sell first.

The gallery also does not take a share of the sale of the pieces. Nepantla’s low barrier to entry for artists attracts people from all over Washington State, including Yakima’s Rosie Saldana. She contributed a piece to the gallery’s Día de los Muertos-themed exhibition.

“You know, we’re getting better, but there’s definitely no dedicated space for Latin artists, so when I heard about this space, I thought it was a really good opportunity to spread my art here on this side of Washington, but also in a space that I really believe in,” Saldana said.

One of his plays reinvents the Birth of Venus by Botticelli. Instead of a white woman emerging from a seashell, there is a skeleton. It’s a version of the famous painting that Saldana says she imbued with her own Mexican heritage. She loves being a part of Nepantla shows because of their mission to be a place that puts artists first and is about building community.

“It’s hard…especially as an artist of color, it’s hard to find those spaces to do that,” Saldana said.

Each month features a new exhibit with a different theme. They had shows about lowriders and another focused on reproductive rights. On Saturday, they are hosting a Día de los Muertos festival at Evergreen High School in White Center.

“You can come here speaking Spanish, English or any other language. You don’t have to explain yourself. You’re included. We hug everyone here,” Avitia-Gonzalez said.

The Día de los Muertos exhibition continues for the rest of the month.

Advice too big for voters