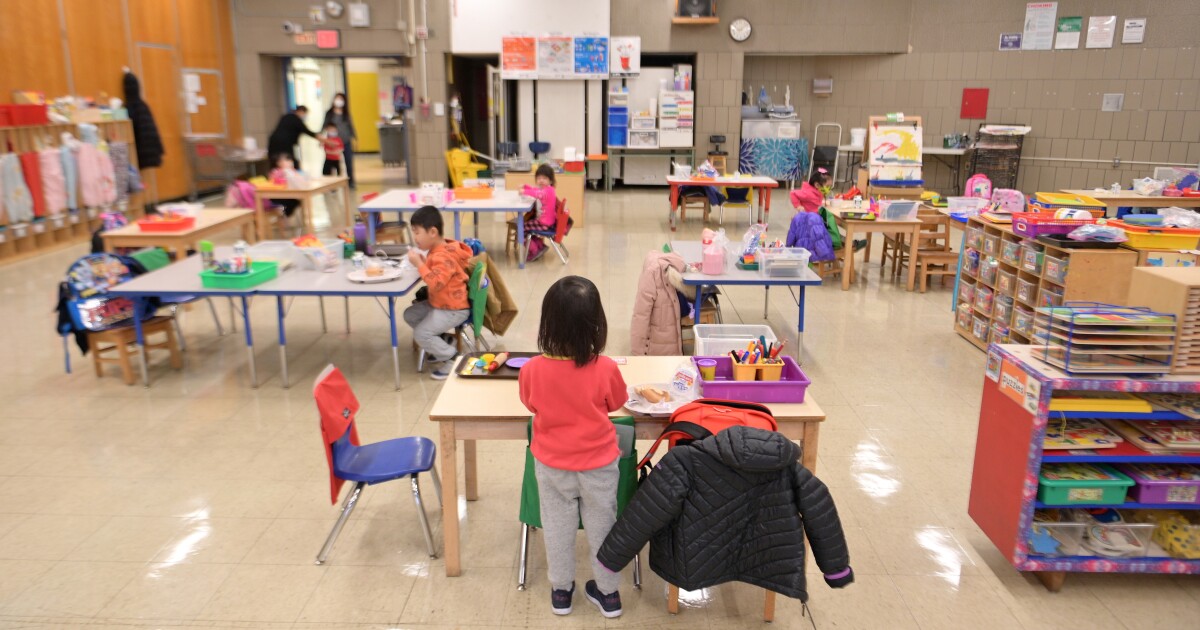 According to a annual review by the National Institute for Early Education Research (NIEER) at Rutgers University. If there’s any good news in the report, it’s that in the 2020-21 school year, federal relief money filled the hole left by state spending cuts.

“There is no time to waste. Publicly-funded programs desperately need resources to address persistent issues of access to high-quality early learning and to support teachers,” says Allison Friedman- Krauss, assistant research professor at NIEER and parent of a preschooler. .

The review is a blizzard of swirling data points, so we thought we’d start by picking out a few of the more compelling numbers.

Pre-K enrollment drops for the first time in 20 years

According to the report, almost 300,000 fewer children were enrolled in kindergarten in the 2020-2021 school year compared to 2019-2020, a drop of 18%. Given the timing, the researchers attribute the decline largely to school closures due to the pandemic and the challenges of providing remote preschool. On average, states ended up serving less than 30% of all 4-year-olds. The news was worse for 3-year-olds: States served less than 5%.

“The pandemic has wiped out a decade of progress in increasing enrollment in publicly funded preschool programs,” the report warns.

Some states cut funding, but Congress filled the gap

States spent about $9 billion on pre-K in the 2020-21 school year — an inflation-adjusted decrease of $254 million from the previous year and “the largest drop in financing since the Great Recession,” according to the report.

Now the good news: The federal government provided about $440 million in pandemic head start relief that states were able to use to more than offset that $254 million drop.

States spent an average of $5,867 per child, a figure that the NIEER says “has not improved significantly in two decades” after adjusting for inflation.

A caveat: this is an estimate, based not on actual program enrollment, but on capacity. Indeed, with overall stable funding but a significant drop in enrollment, states actually spent more than $7,000 per child. But NIEER says measuring program spending by last year’s capacity, instead of actual enrollment, is a more accurate comparison to previous years.

Similarly, the report notes that, overall, government spending on preschool has more than doubled over the past two decades, from $4.1 billion in 2002 to about $9 billion in 2021. But when you break the data down another way, looking at state dollars per childexpenses have been remarkably stable.

“I can tell you that kindergarten is important,” U.S. Secretary of Education Miguel Cardona said Monday in a call with reporters. “Kindergarten should be available for everyone, but at the moment it is not. We have made progress as a nation, but we still have a long way to go.”

Low-income families have been hardest hit

Perhaps the most worrying data in the report comes from parent surveys that capture the impact of the pandemic on preschool enrollment by family income.

In six states, registrations have fallen by more than 30%

The report includes a color-coded map showing the states that have suffered the biggest declines in preschool enrollment: Alaska, Arizona, California, Connecticut, Kentucky and Nevada.

Some states were close to universal pre-K before the pandemic

When you combine state preschool, special education, and federally funded Head Start programs, NIEER found that six states, plus Washington, D.C., served at least 70 percent of their 4-year-olds. years before the start of the pandemic: Florida, Iowa, Oklahoma, Vermont, West Virginia and Wisconsin. Only DC continued to serve over 70% of 4-year-olds in 2020-21.

Enough about quantity, what about quality?

NIEER’s annual review isn’t just about enrollment and funding; it is also a question of quality control. The researchers rate each state using 10 quality criteria, including whether they have early learning standards, small class sizes and well-trained teachers.

West Virginia is one of the few state programs that scored between nine and 10.

“West Virginia has now become the diamond in the rough that everyone has been missing,” Republican state Governor Jim Justice said in a phone call with reporters discussing the NIEER report. West Virginia’s Universal Pre-K program operates in every county in the state and has met nine of NIEER’s 10 quality criteria. The Justice Department called the investment in early childhood education “significant”.

“I don’t care if you’re a Republican, a Democrat, an Independent — first and foremost, we’re Americans. And we have to constantly do what’s right for America,” Justice said.

At the other end of the spectrum, programs in Alaska, Florida, and North Dakota met only two of NIEER’s 10 quality criteria.

About 40% of all children in publicly funded preschools are enrolled in programs that meet less than half of the NIEER quality standards.

The NIEER review comes at a delicate time for the Biden administration. The president is a strong advocate for universal early education and has made the idea a central theme of his Build Back Better program, pledging $10 billion over the next two years to increase the pre-K capacity of the states. That legislation has been stalled for months in the Senate, though Biden has also called for additional pre-K funding in his 2023 budget proposal.