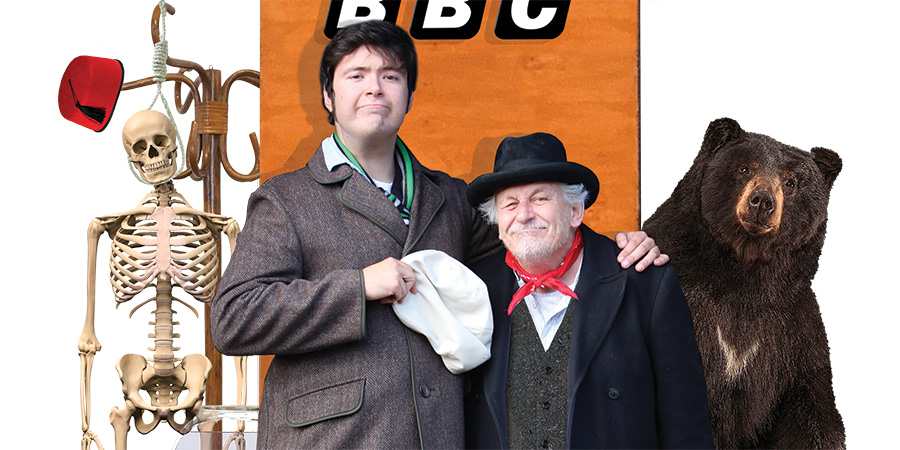 You’d be hard-pressed to find a sitcom geek who wouldn’t claim that Steptoe And Son continues to provoke and entertain. Certainly, it should be impossible to find anyone who doesn’t acknowledge that it paved the way for the genre to be implicit in its handling of comedic and dramatic storylines, and, in particular, with its complex central characters – those at all also flawed, equally fiery, equally tragic eponymous Steptoes.

For those reading this and unfamiliar with the edit, each of the fifty-seven episodes, originally broadcast from 1962 to 1974, tells the story of a father and son (ragpickers/junk dealers, that it’s rarely more than a fabulously decaying backdrop), which are bound by blood. Harold, whose age ranges from mid-30s to mid-40s throughout the fourteen-year tenure, desperately tries to escape their Oil Drum Lane home and, furthermore, the toxic relationship he keeps up with her overbearing and uncaring father, Albert. While each episode would invariably focus on Harold’s exasperation at being chained to “a festering pile of fly-gathered dirt”, Albert, meanwhile, is equally determined not to see his son rise to the top. above “the mire” because, unlike Harold, he sees only stable company, with regular home-cooked meals and the security of company. Having survived two world wars, Albert has an unyielding appreciation for the simplest things. So who needs Mallorca at Christmas when you can go to Mrs Boxwood’s boarding house in Bognor?

Despite this constant friction, Steptoe And Son has a heart, no matter how restless, and a gritty, down-to-earth approach to its comedy that was unparalleled in its time. And when it comes to laughs, writers Ray Galton and Alan Simpson never let you down. Some episodes are more distinctive than others, but each carries measures of pathos, angst, and a style of comedy rarely surpassed.

In 2017, with my theater company Hambledon Productions, I staged a production of Steptoe And Son for the first time. Why we did it can be rediscovered here, in a feature film I wrote in 2018. That was over four years ago now… So what exactly is going on in these shows “tribute to comedy”? When and where is the source material so sacrosanct that to offer a different, stark interpretation would challenge the very reason you’re attempting a revival in the first place?

In 2016, I was standing backstage at my local theatre, The Riverhead, in Louth, Lincolnshire. There was a performance going on and I was waiting for my cue. I turned to my left to speak to assistant director Jeremy Smith, but was stopped by the sight of his silhouette against the black curtains and stark lighting pouring in from the stage. The image he conjured up was quite disturbing…I lowered my voice: “Jerry…you really can’t take this the wrong way…but in a way…you look like Old Man Steptoe …” Jeremy turned to me, looked me straight in the eye, snarled impeccably and growled “meeeeh! Git orf art of it!”

To say, “the rest, as they say, is history,” would be to undermine the careful thought and process that unfolded over the next eleven months. Bringing such iconic characters to life is hugely fun, if daunting and riddled with a few natural insecurities. Having the public support and approval of Ray Galton, when he viewed a recording of the production in 2018 (his writing partner, Alan, sadly passed away in early 2017) meant and meant so much. So does the mountain of compliments from legions of avid Steptoe And Son fans; we had “purists”, sometimes tyrannical it must be said, determined to undermine our efforts, to be won over by the shared emotion of appreciation and pleasure in seeing these rightly revered scenarios and characters come to life before the public.

Another tour followed in 2019, this time a festive edition, which featured the original “lost” sketch from the 1962 Christmas Night With The Stars program. such as the idea was reimagined as a live radio recording reminiscent of the show’s heyday, with myself as Harold, Jerry as Albert, and Lucy Cooper joining us as an on/off girlfriend (mostly off!) From Harold, Delia.

The “radio theater show” has become immensely popular since an acclaimed revival of Round The Horne in the early 2000s. The idea quickly spread to include Kenneth Williams’ vehicle Stop Messin’ About!, Hancock’s Half Hour, The Goon Show, Dad’s Army Radio Series, Much Binding In The Marsh and The Navy Lark. Other sources, such as It’s a wonderful life and A Christmas Carol, have also looked into this new genre. The appeal is that these classic texts, subjects for which we harbor a nostalgic enthusiasm, are faithfully recreated from a different angle, now emphasizing the storyline and the dynamism between the central characters.

There’s also the different theatricality… A mock-up of a live studio recording, with its flashing “applause” lights and the direct address of the performers (usually the ice is broken by a burlesque take on a stuffy announcer) makes the audience feel directly involved. The same goes for the amplification of the sound effects; the audience is invited to ‘listen’ to the sounds derived from a mix of perfectly plausible but sometimes incongruous props, but there’s the added comedic touch of watching a BBC technician in a sharp suit drag a wooden spoon over a washboard then toss a head of lettuce into a tin bucket, to create the desired effect of sounding like Madame Guillotine’s fatal blade falling (for example, as in our 2018 production of The Milligan Papers).

These radio plays often act as a distillation of why the original shows retain their greatness. Also in all of the above examples, sitcoms have already been proven to work on radio. Fifty-two episodes of Steptoe And Son were adapted for the medium between 1966 and 1976, extending beyond the two-year television series.

For Hambledon Productions’ upcoming tour, The Steptoe And Son Radio Show, we have partnered with Apollo Theater Company, who have produced successful tours of The goon show, Hancock’s Half Hour and around the horn. Together we have an extensive tour of nearly fifty locations. The three selected episodes – Is that your horse outside?, A death in the familyand Up, down, up, down – will easily acquaint and familiarize audiences with the Steptoe Saga, allowing them to explore all the foibles and tropes of this most iconic father and son couple.

I’ll be in my rubber boots and my dirty flat cap and Jerry will be there in his scruffy scarf and cardigan with holes in his elbows. He may even bring his dirty and now infamous long-johns…

The Steptoe And Son Radio Show 2022 tour opens in Barnsley on September 6 and ends on November 19 in Soham. Dates and tickets

Susan Unterberg honored by MacDowell for her defense of the arts