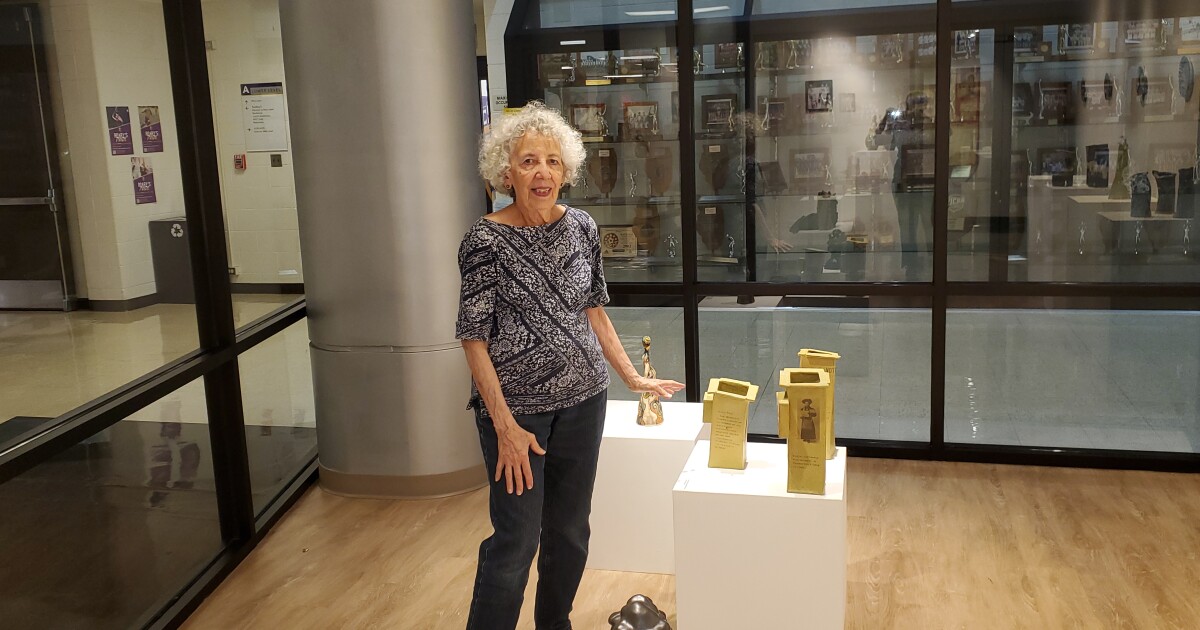 An 83-year-old lifelong learner keeps her skills sharp while carving women’s rights messages into her art. Her work was first featured in a recent exhibition at McHenry County College.

Elaine Kadakia started taking art classes in high school, but the fun didn’t stop there. She took a Saturday class at the Art Institute of Chicago and after graduating from high school, she attended school full-time.

“And then when I graduated, I got a Eurail pass. At that time, a train pass took you anywhere in Europe for a small fee,” she explained. “Of course, that was 60 years ago, you know, a long time ago.”

Kadakia returned home and married her husband, Jayant. He comes from India. She said they traveled there often and that these trips influenced most of her work.

They lived in Springfield where she and her husband raised their two daughters. While there, she joined the American Association of University Women.

“And so, I found that being part of an organization really helped me — it broadened my scope on women’s rights.”

Kadakia said her art is a way for her to support this cause.

When her husband retired, the couple moved to Huntley, which is not far from where her sister lives.

About 18 years ago, Kadakia decided to continue her education at McHenry County College. She needed a challenge. This was around the time women in burkas made headlines.

“I felt really strong about it. I felt women in these burkas, they have no identity. It’s just someone in blue walking around,” she said. “So I have to say that one of the first things I did was a three part clay sculpture.”

This piece was called “Hidden Women”.

So that was one thing – so I really admired the suffragettes and the women who started the movement, Elizabeth Cady Stanton, Susan B. Anthony and other women,” she said.

Kadakia created another sculpture paying homage to these women using extruded clay. She credits McHenry County College instructor Tom Vician for introducing her to different ways to work with clay.

Vician was his instructor for 13 years. He said he likes the way Kadakia incorporates women’s rights into her works and calls her a risk taker. Vician was instrumental in presenting his work.

“And what’s great about the show is that it not only shows his work, but everything that I’ve brought to the program over the years.”

These include decals, 3D printing, underglazes and multi-level firings.

The ceramic class is diverse. The ages range from 18 to 80. Vician said retirees add another layer of learning to the classroom because they help young artists.

Kadakia took the time to show off her display. She points to one that highlights Lilly Ledbetter.

“She worked for a very large company,” she explains. “And she found out that someone else was doing the same job as her, but she was being paid a lot less.”

His actions resulted in the Lilly Ledbetter Fair Pay Act of 2009, the first bill signed into law by President Obama.

Kadakia’s friend Jean Sekera, 86, stopped by the exhibit. Sekera went to the Art Institute with Kadakia and is currently taking ceramics classes at McHenry County College.

“I think his pieces are very beautiful. I mean, look at some of the details she goes into. I mean, it’s not me. I don’t go into specifics,” she said.

Kadakia is excited about her exhibit and never thought something like this would happen. She said she wasn’t sure about having another exhibit but was open to the idea.

And Vician is working to make that happen. He communicates with an instructor from the University of Rockford.

“We’ve been sending emails back and forth that they have a new gallery curator. And so maybe we can wrap up the show and take it on the road.

The exhibit at McHenry ended last week, but Kadakia will continue to take classes there and use what she learns to create art that supports women’s rights.